by Fatih Mehmet Küçük
in Articles
0

In 2002, the Turkish Navy identified requirement to replace its ageing ‘Kartal’ and ‘Vegesack’ class units by more modern patrol capable of carrying out surveillance operations and defending  the Turkish straits, harbors, and naval bases. In July 2004 the Turkish Undersecretaries for Defense Industry released a Request for Proposal for 16 units under the New Type Patrol Project (NTPB), one of the pioneering private sector naval construction projects initiated by the SSM (SSB) in order to increase Turkey’s capability to design and build naval vessels. Following competition among a number of Turkish commercial shipbuilders, the Dearsan Shipyard was selected as the preferred supplier, and a Letter of Intent was signed with SSM (SSB) on 23 May 2007.Four months later, €402M fixed-price contract for patrol boats was signed.

The design, construction, and integration of the boats were realized by Dearsan and assisted by Turkish defense companies and universities. The ceremonial first weld of first of class TCG Tuzla, was launched on 3May 2008. She was launched on 9 April 2010 and commissioned into service on 9 January 2011.The other units entered the fleet at an average of three units per year. With the 16th and final unit, TCG Kuşadası, the NTPB programme is thought to be fastest for vessels of this size in peacetime in Turkey.

With an all-steel monohull, the 56,9m long ‘Tuzla’ class patrol boats boost a full load displacement of 420 tons, while their small draft 2,5m enables them operate in shallow-waters and close to shores. Although not as stealthy as ‘Heybeliada’ or ‘Ada’ class (MİLGEM) corvettes, the hull and superstructure of ‘Tuzla’ class are inclined at different angles and sides of ship are broken up.

Underwater noise is kept to minimum by using elastic-mounted engines, vibration mountings for all equipment, and structural acoustic damping. Cooling devices reduce thermal radiation. In order to suppress the IR signature even further; exhaust outlets are arranged along the boat’s side just above the waterline. The boats also feature a pre wetting (wash-down) installation.

The tender for the NTPB units included a range of specific performance parameters. Seakeeping and stability requirements set by the Turkish Navy prescribed the boats to be capable of conducting all tasks up to SS+(2.5 waves) and key surveillance  task up to SS5(4 waves). Another requirement set by the Turkish Navy was to minimize crew numbers and reduce maintenance wherever possible. The result is high level of automation allowing the patrol boats to be operated with a crew of just 34.Their Platform Management System(PMS) integrates the control of all platform machinery, electrical power  generation distribution and supporting systems. A comprehensive range of user interfaces monitor the propulsion plant, damage control, and closure state. Sensors, actuators, and integrated closed-circuit digital TV system provide a flexible and effective approach for data acquisition and control. An integrated bridge systems offers embedded functionality for bridge and deck operations, allowing the boat to be manned by single watch officer and two other crew members on bridge during transit cruising. 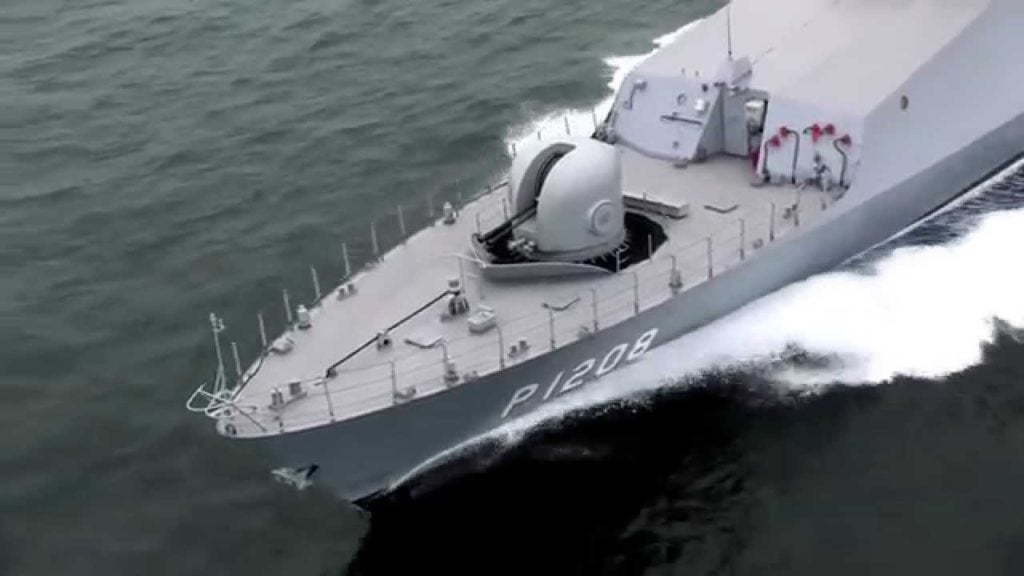 The CIC features five multifunction consoles: one of the STAMP machine guns, one TASK-40 for Oto Melara gun, one of the Simrad SP92 MkII sonar, one of the Raytheon radar and one of for the ASRLS rocket launcher.

Aselsan also provided its ASELFLIR 300D EO director and fire control system capable of determining, identifying and tricking high speed targets on the sea surface, in the air and on land. It tracks up to six targets simultaneously. Aselsan was also responsible for an integrated communication system providing both internal and external communication capabilities. It includes wideband radios, commercial SATCOM equipment, as well as secure open voice and data communications.

Yaltes provides the operator consoles and tactical bridge display units and the Kongsberk Maritime delivered the Simrad SP92 MkII hull-mounted multi-frequency sonar. It is designed for detection of weak and scattered targets, is capable of operating in 11 different frequencies, and has detection range of more than 3,000m

Raytheon’s surface search radar ensures safe navigation and detection of surface targets at close range. Other sensors include the IFF Mod4, a Ship Information Transmitting System (GBDS) and the TB-SH under water phone.

Where The Crew Bunks

The ‘Tuzla’ class features significantly improved habitability. The Commanding Officer has a single cabin. Officer’s cabins are designed for four persons, while Petty Officer’s cabins are designed for 6 person. Rating’s cabins are designed for 21 persons, and there is additional accommodation for up to 12 sailors. The new class also allows the possibility to embark additional personnel (depending on the mission), including boarding teams, law-enforcement officers, rescued persons, and trainees. The living areas are concentrated amidships on the lower deck. There is wardroom for the Officers, a mess for Petty Officers, and a cafeteria for the Ratings, all located on the same deck with the gallery. The interiors are specious and very comfortable, and the units also feature a well equipped gallery and laundry.

The ‘Tuzla’ class is powered by two Tognum MTU 16V 4000 M90 diesel engines with 7300hp, and two MTU diesel generators with total power of 520hp.The boats can remain on station for up to 14 days, and the on-board fuel capacity provides an operational range in excess of 2,000nm(3,700km) at 12 knots. Low noise level drive fixed-pitch propellers delivered by Otto Piening GmbH along twin shafts enable the boats a maximum design speed of 25 knots.

The Tuzla class demonstrates the Turkish Navy ability to deploy innovative platforms outfitted with appropriate equipment for their intended roles and missions. The NTPB program represent a keystone in Turkey’s effort to further develop its industrial capabilities to design, build, and integrate complex naval ship systems. The new class is proof to the fact that Turkey is continuing to develop a strong and technologically advanced defense industrial base, with the country’s naval shipbuilding industry becoming a major global player. Dearsan Shipyard designed and constructed the ‘Tuzla’ class on tailor-made basis in order to provide full response to any customer’s need. Turkmenistan became the first export customer when it ordered an initial batch of two units in 2011; this was followed, in early-2012, by an order for additional eight units. The Turkmen ‘Tuzla’ class units have a similar weapon and sensors fit like their Turkish Navy equivalents, albeit with some changes, such as THALES SCOUT/VARIANT 2-D air surveillance radar and two 25mm STOP gun mounts from Aselsan.

A second customer, the Qatar Emiri Navy, followed the same path in 2012 with signing of a contract for up to six ‘Tuzla’ class patrol boats. They are expecting to replace the ‘Barzan’(VITA type) class and ‘Damsah’ class (COMBATTANTE III M)FAC.