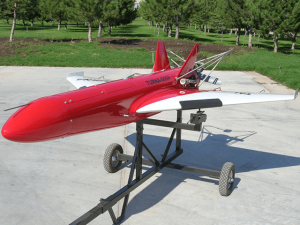 Being an indigenous Design and Development program, TURNA Target Drone Systems program was initiated in 1995 to meet the increasing training needs of the Turkish Armed Forces (TAF).

Indigenously designed and produced TURNAs, which entered the inventory of TAF in 2001, are being actively used in training of air defense units’ trainings.

TURNA Target Drone System can be used as a training platform for conservation and improvement of defense capabilities against air threats. The highly cost-effective system, which has an open architecture design that can be shaped in accordance with the needs of the customer, has proven its affectivity during real firing missions at operational areas with its distinctive simulation of air threats and missiles capability, high maneuverability, high speed, ease of operation, low mission risk and modularity. TURNA is used for tracking and firing exercises of radar, optically, thermally or manually controlled barreled anti-aircraft guns and guided missiles.
In inventory of Turkish Air Forces and Turkish Land Forces.