Turkey continues to make efforts for lasting security of Afghanistan

NATO Senior Civilian Representative in Afghanistan Ambassador Stefano Pontecorvo and Turkish Ambassador to Afghanistan Oğuzhan Ertuğrul also attended the ceremony. In his speech, Brigadier General Yurtsızoğlu, who took over his duty, said, “The Training, Advise and Assist Command and the Turkish unit will continue to serve in close cooperation with the Resolute Support Mission and its Afghan counterparts as always.” 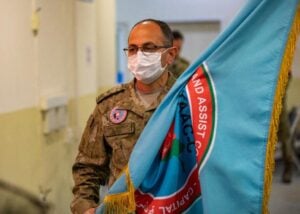 Speaking at the ceremony, Lieutenant General Zanelli said, “Your extraordinary effort to train, advise and assist the 111th Capital Division of the Afghan National Army, the Kabul Police station and other security services in Kabul is not only for the Afghan National Defence and Security Forces, but at the same time it is also an indication of the success of our Mission. Today I want to thank the entire Resolute Support Mission family for your commitment and effectiveness.” 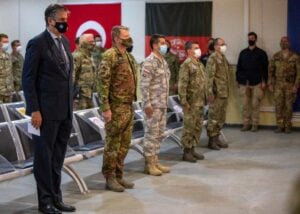 Established in 2015, the Resolute Support Mission is a NATO-led non-combatant mission to train, advise and assist Afghan National Defence and Security Forces, which took the nationwide responsibility for Afghanistan’s security, which follows the conclusion of the previous NATO-led International Security Assistance Force. The mission’s purpose is to help Afghan security forces and institutions develop their defence capacity in Afghanistan and protect its citizens in a sustainable way.

Military-Financial Cooperation Agreement between Turkey and Afghanistan was signed

On Wednesday, December 9, 2020, the representatives of the Islamic Republic of Afghanistan and Republic of Turkey met in Ankara. During the meeting between the representatives, the Military-Financial Cooperation Agreement and the Financial Aid Application Protocol were signed between the two countries. According to the agreement in question in Turkey, in the period of the next five years, 100 million Turkish liras (about 13 million US dollars) is scheduled to make military equipment assistance in the amount for the Afghan National Defence and Security Forces (ANDSF).

According to the briefing on the issue of Afghanistan’s Embassy in Ankara, it is expressed that Turkey would provide a million dollars on an annual basis for these programs. These new agreements increase the aid that addresses ANDSF’s needs over the next five years to approximately three million annually.