Turkey to operate Hamid Karzai International Airport, one of Afghanistan’s most important airports.

While NATO prepares to withdraw from Afghanistan, there has been a significant development after security concerns over the country’s major international airport have increased. An Afghan government official told The National that the Turkish government has agreed to take charge of Kabul’s international airport, Hamid Karzai International Airport, within the scope of a $130 million deal with NATO.

It was also stated that the agreement was welcomed considerably with pleasure after weeks of uncertainty about the Turkish government’s determination to defend Hamid Karzai International Airport. The Afghan official said details and the exact takeover date have not been confirmed yet.

Regarding the development, Mahmood Shah Habibi, Head of Afghanistan Civil Aviation Authority, believes that the news that Turkey has assumed responsibility for the Kabul airport will dispel some fears. “This will reassure the international community and it is a better solution because the Taliban has never attacked the Turks,” Habibi said.

Rangin Dadfar Spanta, former National Security Advisor to Afghan President Ashraf Ghani, spoke to The National before the agreement between Turkey and Nato was made public and he said “We need a transition period of three or four years for the Afghan government to take control, but now we need to take over in three months.”. He also added “Diplomats will not trust [the airport’s safety and security] and will leave Afghanistan. This is very dangerous.”.

“We are struggling with the transition to take over airports from NATO control. Due to a lack of expertise, we simply do not have the capacity to operate airports with Afghans and we do not have the financial strength to bring in private contractors.” Said an Afghan government official in a statement last month.

Turkey continues its efforts for the permanent security of Afghanistan

With a ceremony held in Afghanistan’s capital Kabul on March 30, 2021, Brigadier General Selçuk Yurtsızoğlu took over the command of the NATO-led Training, Advise, and Assist Commands (TAAC) from Brigadier General Ahmet Yaşar Dener. NATO Senior Civilian Representative to Afghanistan, Ambassador Stefano Pontecorvo and Turkey’s Ambassador to Afghanistan Oğuzhan Ertuğrul also attended the ceremony. In his speech, Brigadier General Yurtsızoğlu, who took over his duty, said, “The Training, Assistance and Advisory Command and the Turkish contingent will continue to serve in close cooperation with the Resolute Support Mission and their Afghan counterparts as always.” 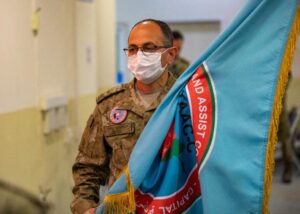 The USA is reducing its military power in Afghanistan

The USA, which has been carrying out military operations in the Middle East for about 20 years as of the September 11 Al-Qaeda terrorist attacks, stated in the press release that 2,500 US military personnel who are stationed in Afghanistan will be withdrawn from the territory of Afghanistan before September 11, 2021. After the USA announced that it would withdraw its troops from Afghanistan, Scandinavian allies Norway and Denmark agreed to do the same. Norwegian Foreign Minister Ine Eriksen Søreide told the national broadcaster NRK, “We will start the withdrawal of the Norwegian forces on 1 May and will finish by September.”