The best in its class: BORAN 105mm Towed Howitzer

The qualification tests of the BORAN 105mm Air Portable Light Towed Howitzer Fire Control System were successfully completed with the shots made in Konya Karapınar. BORAN Fire Control System is a fire control system developed for use in a lightweight, high firepower 105mm BORAN howitzer that can be transported from air by helicopter, towed by road.

This integrated system, which enables the preparation, fire management and fire control of the howitzer to be carried out with a computer, first speed measurement radar and inertial navigation system, also has electro-optic and laser rangefinder units that enable firing by seeing day and night. The system also provides digital integration to command control systems and fire support elements of the howitzer. 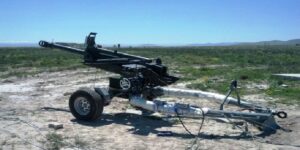 When it comes to providing the intense fire support required by the operational troops in mountainous areas and in the field without seeing the enemy, the first low-cost weapon systems that come to mind are airborne light towed howitzers. The risk of total front war that decreased after the end of the Cold War gave way to asymmetric & regional proxy wars.

In the early 2000s, the need for a modern howitzer that can be towed by light tactical wheeled vehicles and easily change position, can be transported by airborne helicopters or thrown from aircraft with a parachute and that can support ground troops in operation areas where land transportation is difficult has emerged. The project, which was initiated by the Undersecretariat for Defence Industries to develop this new howitzer, which will be equipped with modern fire support units, entered into force with the agreement signed on November 6, 2009.

For the 105mm Boran Howitzer Project, Mechanical and Chemical Industry Corporation is developing the weapon system and Aselsan is developing the fire control system. According to the first contract, the development contract period has been signed for the howitzer as 49 months, and for the mass production phase of 106 105mm howitzers as 54 months.

Things To Do Under Mechanical and Chemical Industry Corporation Responsibility

Things to Do Under the Responsibility of ASELSAN

The weight of Boran 105mm howitzer, which is stated to be shaped on the L118 prototype in various sources, is written as 1700 kg. However, with the latest improvements, howitzer weight approached the requested 1550 kg at the beginning of the project. As the force revised the project, the lightness of the howitzer lost its priority. The main reason for this is; The “bastion”, which is included in the M119 (L118) model to reduce the weight and provides the howitzer sitting on the ground and firing precision, is the removal of the “rostrum” in our artillery class and the addition of a shock absorber system. This shock absorber system, which was added to the lighter howitzer, caused the howitzer to jump a little after the shot, causing the barrel to rearing, but the jumping problem was solved with the developed amortization system.