by Salih Kıvrak
in Warship
0

The first steps of the MILGEM as the first naval ship and the most important and most successful modernization project of the Republic of Turkey and Turkish Naval Forces were taken during 1990s. Because of the private sector’s attitude towards military ship design projects in Turkey and the adversities during the determination of the project requirements, the initiation of the project was extended to 2000s. In order to accomplish the design activities; the Design Project Office (DPO-then MILGEM Project Office) was founded on March 12, 2004 with a modest team of 45 people by the initiative of the Naval Forces Command in Istanbul Naval Shipyard.

Turkish Naval Forces assumed responsibility of the design, construction, and performance to realize the project nationally after the design bidding processes were concluded with less than expected national share. From feasibility studies to detail design, every design and integration process was executed by the engineers of the Turkish Navy, the construction was completed by the workers of the Turkish Navy, and procurement was performed by the Presidency of Defense Industries (SSB). MILGEM Project is one of the exceptional projects that are considered as a great success by the international authorities for its timely execution with required performance. All of the industrial and intellectual rights of the MILGEM Project are property of the Ministry of Defense.

The four ships of the MILGEM Project are named ADA Class Corvettes. The first three ships of the project TCG HEYBELİADA, TCG BÜYÜKADA and TCG BURGAZADA were put into service in 2011, 2013, and 2018, respectively, after successful testing. The fourth ship of the project KINALIADA is being tested and is planned to be delivered in 2019.

Pioneered by the Turkish Naval Forces and executed with great success, MILGEM Project allowed our country to achieve the goal of having the first national ship. The need for an Air Defense Destroyer that leans on natural resources has arisen in order to maintain the design capability, and reinforce air defense of the country gradually from open seas. DPO initiated the design efforts of TF-2000 Air Defense Destroyer (HSHM) in July 2017 by the order of the Turkish Naval Command.

TF-2000 HSHM is being designed with the following features:

TF-2000 HSHM will be a part of the defense system of the country starting from open seas and will be deployed to defend regional and task force air space using; 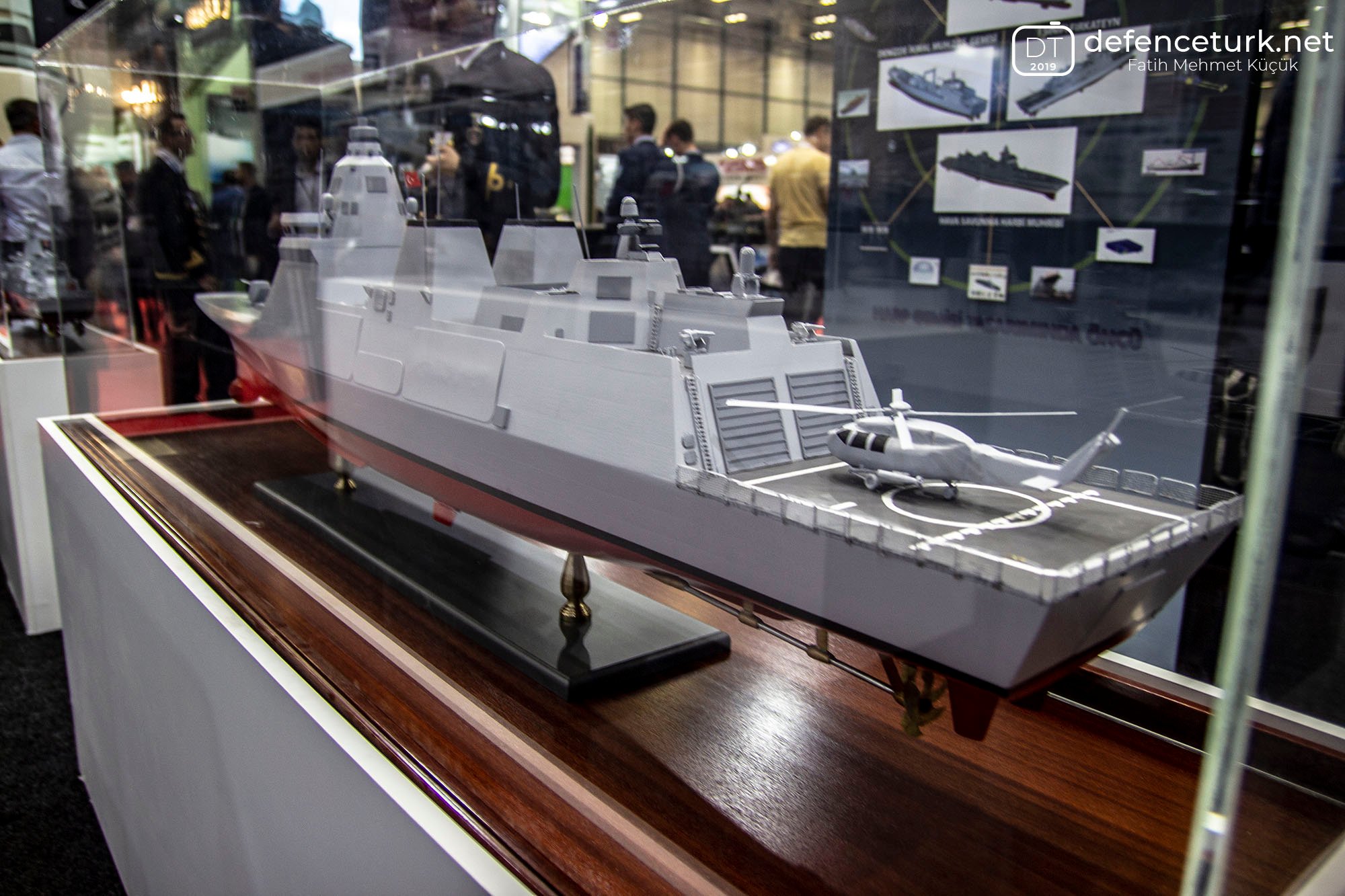 TF-2000 HSHM will have short, medium, and long range surface to air guided missiles (SAM) for multi-layered air warfare. For self-defense purposes, along with a main gun, the ship will be fitted with guided missiles, close in weapon system (CIWS) with 360° degree circumferential protection and active defense system against supersonic and subsonic guided missiles that are capable of various attack maneuvers.

TF-2000 HSHM will have a Decoy Launching System (KALKAN) that has nationally designed software and hardware that is capable of launching decoys against RF and IR guided missiles automatically, semi-automatically and manually, issuing tactical recommendations against guided missiles and is integrable with the Combat Management System. 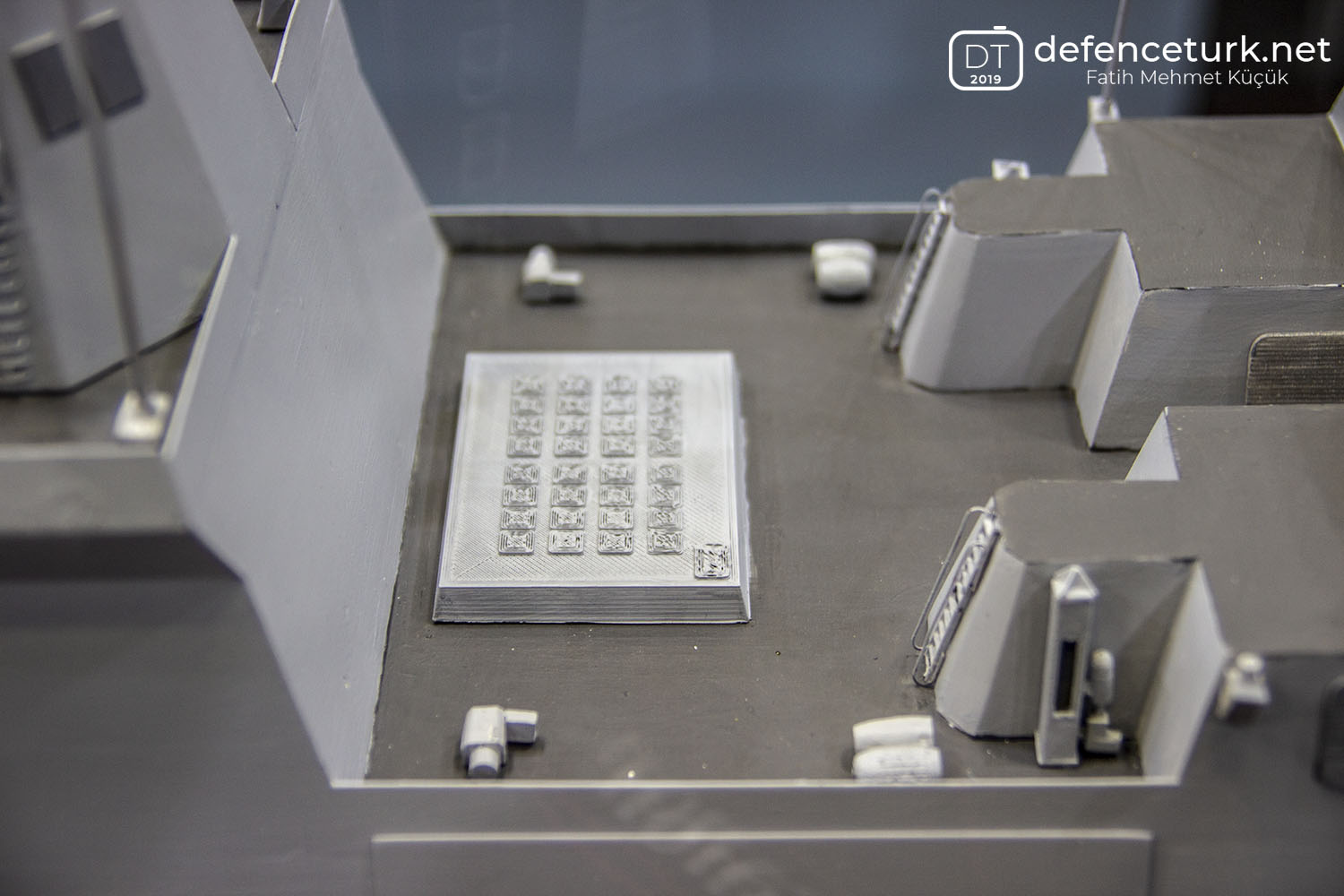 GENESIS ADVENT CMS, within TF-2000, with its enhanced threat evaluation, engagement planning and execution algorithms will provide rapid and effective reaction and decision-making support in dynamic and unpredictable anti air warfare environment. Moreover, it will deliver resource optimization by sharing sensors and weapons throughout the task force with its integrated network enabled capability and improve task force defense.

TF-2000 HSHM will be able to conduct hard-kill and soft-kill capabilities integrally and simultaneously.

TF-2000 HSHM will have a large caliber main gun with high firing rates, capable of firing modern and intelligent long range missiles against air, surface, and land-based targets. The main gun will be fully automated with multi loading system and will be integrated to the National Fire Control System. TF-2000 HSHM will be equipped with long range surface to surface guided missiles (ATMACA), which are nationally developed and capable of conducting deceptive maneuvering for surface warfare. TF-2000 HSHM will also perform semi and full auto reactions at high firing rates against asymmetric threats at 360 degrees of environmental protection coverage with laser guided missiles/stabilized automatic gun/small caliber machine gun fitted with E/O sensors and laser range finder.

TF-2000 HSHM will be outfitted with secure, fast and alternated internal and external communication systems which are reliable on strategically, operational and tactical field, and meet pre-defined operational requirements. For navigational purposes, the ship will be equipped with LPI-enabled navigation radar which will provide circumferential coverage, WECDIS and WAIS systems, a dual purpose surface search and navigation radar, electronic navigation maps and various navigation assistances and anti-collision systems in accordance with International Maritime Organization (IMO) rules.

TF-2000 HSHM will have a national Combat Management System (GENESIS ADVENT) that has integrated decision support mechanisms and eases decision making process. The Combat Management System will be capable of collecting, compiling, and assessing the data from the weapons and sensors; providing command support on weapons assignment, and exchanging target information with other platforms.

TF-2000 designed to have a platform to carry and support two medium weight transportation helicopters with a maximum weight of 15 tons and two Unmanned Air Vehicles with reconnaissance/attack modes day and night with additional ammunition stores and JP-5 refueling capabilities.

The helicopter landing area will be certified with Level-1 and Class-2 designations to allow the helicopter to be supported for day and night operations with required service facilities.

Optimum single hull displacement type vessel form has been chosen from the probable solutions that has the least hull resistance/power requirement and the highest seakeeping and stability performance. The optimum hull form resistance values have been verified using Computational Fluid Dynamics (CFD) analyses.

TF-2000 HSHM is being designed to reduce Radar Cross Section (RCS), Underwater Acoustic Signature, and Magnetic and Infrared Signature. Since the initiation of the design a signature management approach is employed in order to reduce abovementioned signatures using appropriate superstructure geometries.

The ship will be equipped with sensors and detectors against Chemical, Biological, Radiological and Nuclear threats. NBC citadel and zoning system will be employed with positive air pressure inside the ship.

Structural configuration to ensure high survivability will b verified usi itins also g Finite Element Method (FEM) for each of the threat scenariose . Moreover envisioned to use survivability software to investigate susceptibility, vulnerability and recoverability of the ship.

Structural scantling and longitudinal strength calculations of the TF-2000 HSHM are carried out along with general design concept and principles in compliance with the rules of the Turkish Lloyd. Structural design and survivability analyses will be executed using in house approach that was developed by DPO with the experience of the previous designs, military standards of the Turkish Navy, and other international naval rules. All of the strength and vibration analyses will be verified using FEM. Throughout the design process, in order to reduce the weight and the life cycle cost of the ship, a structural optimization approach will be implemented.

Usage of high strength steel is envisioned as the main construction material for the hull and superstructure, additionally aluminum will be an option in order to reduce the superstructure weight if suitable.

Main propulsion system of the TF-2000 HSHM will be optimized for the needs of the operational scenarios, survivability, speed and maneuverability requirements, operating profile and life cycle cost. At the current stage of the design of the TF-2000 HSHM the main propulsion system is envisaged to employ a proven, robust, redundant, and cost-effective CODOG architecture. The CODOG architecture employs;

TF2000 has been designed with separated main and auxiliary engine spaces with two independent prime movers in each space and an additional reduction gear compartment in order to provide high level of survivability of propulsion architecture. TF2000 engine rooms are sized to accommodate the alternatives of different engine manufacturers.

The ship is designed with three large high speed RHIBs to be able to carry out special operations and personnel transportation for 16 people. RHIBs could be operated on board or remotely depending on the duty and can carry required payload.

Two of the davit launched RHIBs are located on the port and starboard sides of the ship for fast and secure operation. In order to lower and hoist safely at high seas a third RHIB is located on the stern ramp to be used at low speeds and is enclosed with a stern door.

The activity of Azerbaijani peacekeepers in South Sudan is highly appreciated