The first prototype of TS1400 was delivered to TAI in the ceremony organized by TEI – TUSAŞ Engine Industries.

With the “Delivery of the First National Helicopter Engine TEI-TS1400 and Design Center Inauguration Ceremony”, the first prototype of the TS1400 was delivered to the Turkish Aerospace Industry (TAI). The ceremony was attended by President Recep Tayyip Erdoğan, Minister of National Defense Hulusi Akar, Minister of Industry and Technology Mustafa Varank, President of Defense Industries İsmail Demir, TEI General Manager and Chairman of the Board Mahmut Faruk AKŞİT and TUSAŞ Chairman of the Board of Directors.

Speaking at the ceremony, TEI General Manager and Chairman of the Board Mahmut Faruk AKŞİT thanked all TEI employees who contributed to the Turboshaft Engine Development Project (TMGP). In his speech, Aksit stated that despite all the difficulties emerging during the project, the engine was developed, and thus, the first prototype of the engine was delivered to TUSAŞ. Prior to the moment the delivery of the national engine TS1400 prototype to TAI took place, the TS1400 engine was successfully retested before President Erdoğan and the guests. 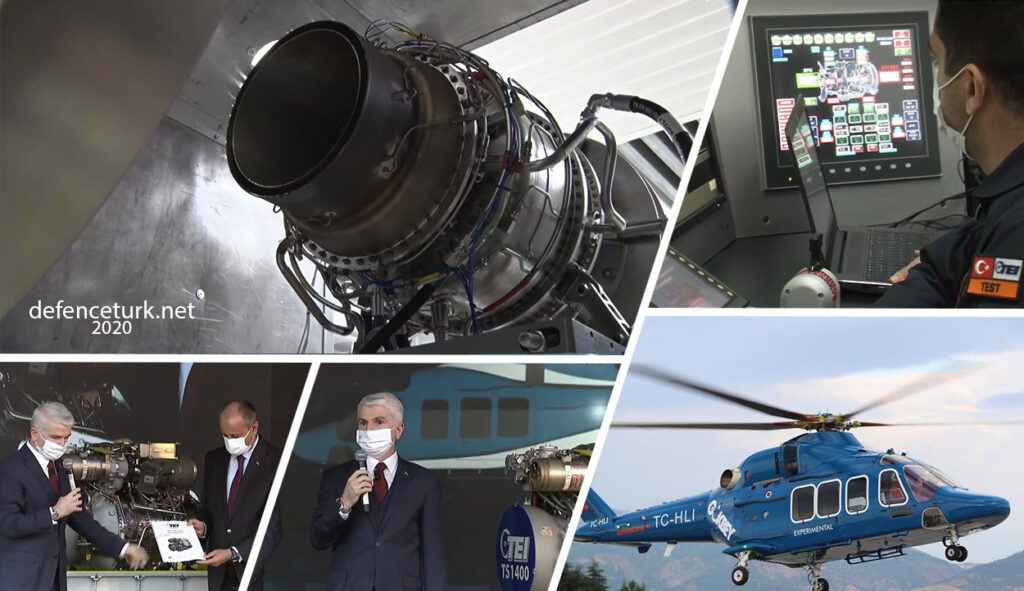 Speaking at the “CAREER AND PROJECTS AT TEI” event held on December 3, 2020, TEI General Manager Mahmut F. AKŞİT reminded that the contract for the TS1400 engine was signed in February 2017, and the engine was first ignited in January 2020,

“In this year on October 22, we successfully started our engine (TS1400) as a complete helicopter engine, that is, including the power turbine to turn the propeller of the helicopter. We have completed the minor deficiencies including accessories since October 22.”

TEI continues its efforts to complete the engine for GÖKBEY first general-purpose helicopter to be produced. Akşit stated that they had developed a powerful engine and said that the TS-1400 engine produced 100-150 more horsepower than the engine (LHTEC-CTS800-400A, 2 1014 kW) used in GÖKBEY’s tests and currently powering our T129 ATAK attack helicopters.