TANOK 120 mm Laser Guided Missile has been developed as an innovative alternative to conventional munitions used in tanks and other artillery guns to have accurate, cost-effective fire power.
TANOK Missile is fulfilling the Armed Forces’ needs to have laser guided anti-tank artillery ammunition. The missile can be fired from land and portable platforms with low weight and soft
launch motor. 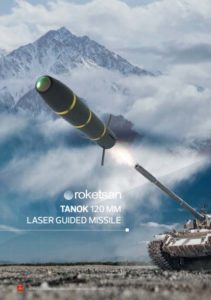