The T-107/122, 107 and 122 mm Multi-Purpose and Multi Barrel Rocket Launcher (MBRL) is a weapon system that provides concentrated and effective fire support against high priority targets in all weather and terrain conditions during day and night. Highly maneuverable T-107/122 MBRL can fire TR-107, TR-122, TRB-122 Rockets and TRG-122 Missiles. 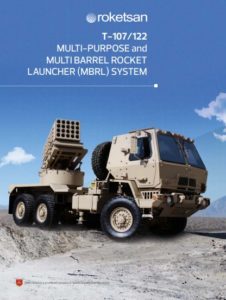 The T-107/122 MBRL Battery is capable of performing independent missions with its mission support vehicles.

The T-107/122 Launcher is a highly mobile system with superior fire power which is capable of firing 60 x 107
mm rockets or 20 x 122 mm rockets or missiles within a short period.

The L-107 /122 Ammo Supply Vehicle is the mission vehicle which performs ammunition transportation, loading the T-107/122 in all weather and terrain conditions in the field.

The M-107/122 has a High Altitude MET System and a Ground MET System. The M-107/122 MET Vehicle provides the required high altitude meteorological reports and sends them to the C-107/122 Command & Control Vehicle and to the T-107/122 Launcher for the ballistic calculation before firing.

The R-107/122 is a mission support vehicle which performs maintenance and repair functions in the field at a unit level within a T-107/122 battery. The R-107/122 can be used as a second-level maintenance vehicle at battalion level as well.

• TR-107 Rockets can be fired directly by using direct fire control unit inside the cabin.
• Launcher’s hydraulic support legs, help the dispersion to be kept at a minimum level.
• With its massive fire capability, the T-107/122 Launcher can be used not only to suppress target areas, but it can also be used against point targets effectively.

The T-107/122 is able to fire the 107 mm rockets at negative elevations in mountainous areas to targets below the launcher’s altitude.

The T-107/122 Launcher Platform is a 4×4 or 6×6 tactical wheeled vehicle, which provides superior on-road and off-road capability. Its compact and robust structure provides a reliable launching platform.

Due to the fully automatic navigation and aiming systems, the T-107/122 can be operated with two crew, launcher commander and driver.

The flexibility and modular structure of the T-107/122 MBRL System makes it a very important fire support vehicle:

• Capability of using a variety of ammunitions with warhead of various class and type
• Ease of transport by various means
• Capable of performing multiple missions thanks to tool and parts (launcher) The T-107/122 launch vehicle platform is a 4WD or 6WD tactical wheeled vehicle whose brand and model can be specified according to the user needs. According to the user’s logistical infrastructure and requirements, subsystems including radio, power system, navigation systems etc. can be designed in different configurations

The T-107/122 has a minimized vulnerability on the battlefield because of its shoot and scout capability of quick emplacement and displacement, its high mobility, its low profile thanks to its compact structure and because of its secure digital and voice communication capability. The small rocket smoke signature of ROKETSAN’s TR-107 rockets, due to reduced smoke composite propellant, makes it difficult for an enemy to make a direct observation; another important aspect to enhance the survivability of the T-107/122 in terms of the avoidance of detection.

The T-107/122 Launcher has the capability to launch both 107 mm rockets and 122 mm rockets/missiles, giving T-107/122 units the capability to cover a target area from less than one kilometer to up to more than 40 kilometers in range. Depending on the threat and the mission, it can be loaded in advance with the required type of rockets or missiles. 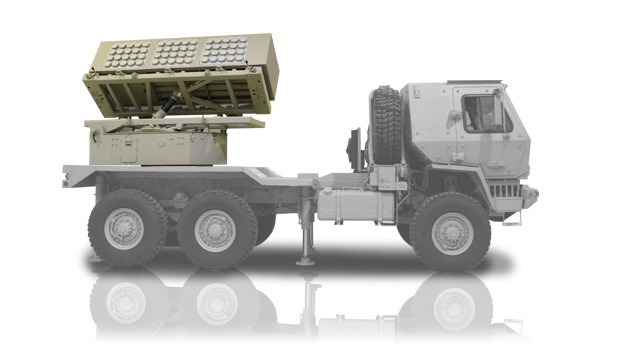