by Seray Güldane
in Air Force and Air Systems
0

Maksim Masimov, Russian ambassador to Iraq, states Moscow is ready to respond to the request of Iraq for S-400 air defense missile systems procurement by Russia to be deployed in Baghdad.

“Russian side has not had such request. Needless to say that the latest developments have bolstered the interest in air defense missile systems, particularly S-400.” reported Iraq-centered Alahad TV, in a statement by Maksim Masimov on Thursday. “It is still too early to elaborate on. For this reason, we will enforce such request when it is submitted to us. “ said Maksimov. The statement was announced after Iraq PM Adel Abdul-Mehdi was informed by Irak Parliament Security and Defense Committee about the request to purchase the long-range ground-to-air missile defense system and a comprehensive framework with regards to the process.

Badr al-Ziyadi said, in his interview published by Iraq official gazette Al Sabaah, “The Committee, has submitted a thorough framework to PM and claimed the approval of S-400 defense system procurement The issue has already been consulted to the relevant authorities in Irak Armed Forces and now awaits approval by PM.”

USA has warned Iraq that there will be some consequences arising from this agreement on the purchase of S-400 air defense missile systems, which are pronounced as “developed”, and extending cooperation with Russia to military.

The former US Department of State Spokeperson Heather Nauert highlighted on February 22, 2018, the signifince of Countering America’s Adversaries Through Sanctions Act (CAATSA) and that they remained in contact with a number of countries, including Iraq, to discuss the possible outcomes of the agreements to be signed with Moscow. On August 2, 2017, US President Donald Trump ratified an agreement on CAATSA sanctions towards Iran, North Korea and Russia.

Russia decline Iran’s request to purchase S-400 air defense system, reported Bloomberg in 2019. The reason for the decline was that there were some concerns this sale would exacerbate the situation in Middle East.

According to the notes released by media in advance, Russia declined Iran’s request to purchase some various combat aircrafts due to the sensitive balance of power. Besides, it is also asserted that due in large part to the political reasons, along with many others, Saudi Arabia and Qatar also mulls over the purchase of S-400 air defense systems.

Minister of National Defense, Hulusi Akar said on January 15, Turkish Armed Forces still strived to activate Russian S-400 systems. The process would be concluded by April or May, 2020. The delivery of first parts were finalized in June, 2019 through an airlift operation. 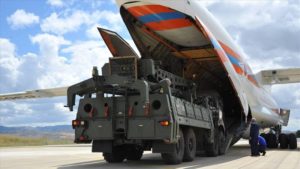 S-400 Triumf (NATO: SA-21 Growler) is an air defense missile system that was taken into the inventory of Russian army in 2007, and designed to be used against ground targets, along with aircrafts, cruise missile and some other ballistic missiles. According to TASS, a major Russian news agency, S-400 can engage targets at an altitude of 35 km and within a distance of 400 km.