President of Defence Industries İsmail Demir, who was a guest of Haktan Uysal’s program “Memleket Meseleleri” on A Haber, made important statements.

Hakan Uysal asked “Speaking of the Eastern Mediterranean, we know that works still continue within the naval forces. In this context, one of the projects was the aircraft carrier project. The aircraft carrier project has been transformed. There is an Anadolu ship on the one hand. Can you share the last point reached on this subject?” and PDI İsmail Demir responded: “Our maritime industry and marine engineers in Turkey are capable of designing and manufacturing an aircraft carrier and now our Anadolu ship or its more advanced models. It can be said that works in this sense have been done.”

PDI Demir ended his statements about the aircraft carrier by saying:

“Calling our Anadolu ship an aircraft carrier would not be incorrect. Of course, there are various ships in the aircraft carrier class. Speaking of that class, ships at various levels can be mentioned. Helicopters can land and take off very easily on our current Anadolu ship, and planes that take off vertically can land and take off. Certain parameters are currently being worked on. We continue our efforts to make it possible for certain air platforms to take off and land on our Anadolu ship. These can be UAVs and Armed UAVs. And they can be of various versions. At the same time, as our President clearly said; Our maritime industry and marine engineers in Turkey are capable of designing and manufacturing an aircraft carrier and now our Anadolu ship our more advanced models. It can be said that works in this sense have been done. Because this declaration of our President is an instruction for the sector for us in a sense. While conducting a study about what the existing systems in the world are, and revealing the capabilities of our indigenous industry, I can say that they have started very detailed technical studies on what aircraft carriers will emerge as a result of their work. In other words, if your arm needs to reach a little far if you need to send a certain force, it is obvious that it must have multi-skilled systems on land, sea, air elements, and also at sea.” 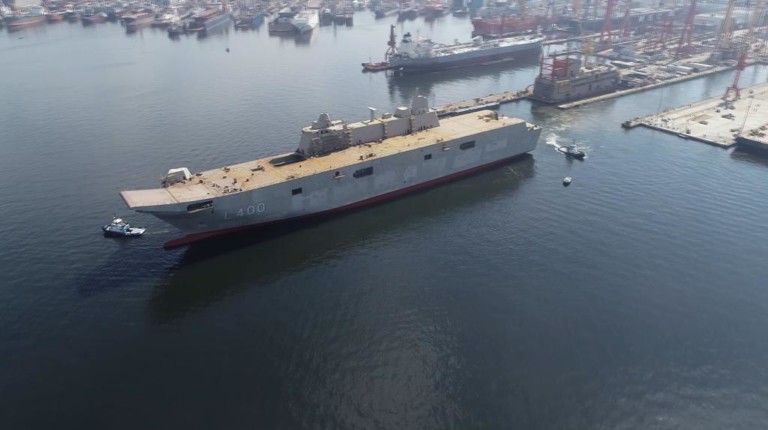 The construction of the TCG ANADOLU ship was started within the scope of the Multi-Purpose Amphibious Assault Ship (LHD) project initiated by the Presidency of Defence Industries. The construction of the TCG Anadolu Ship which can transfer a force of a minimum battalion size to the designated place with its own logistic support, without requiring home base support, continues in Sedef Shipyard in Tuzla, Istanbul.