by Fatih Mehmet Küçük
in Articles
0

Having their origins in Ottoman period, Republic of Turkey Minister of Interior Turkish Coast Guard Command with its full name, renamed as the Gendarmerie Naval Command in 1957 by the merger of the Border Command and Gendarmerie Naval Unit. It was named with its current meaning in 1982 by law and was named as the Coast Guard Command. In 1985, it was identified as an armed security force which will be connected to the Ministry of Interior in terms of duty and service during peace; and which will enter into Turkish Naval Force’s service during war.

If we look at inventory and how it works:

In the coast guard jargon, boats are often called vessels because the old Navy Forces habit is called a vessel for small boat classes.

Designed and built in Yonca Onuk shipyard, these boats were made by means of the enlargement and improvement of the boat of shipowner Kahraman Sadıkoğlu which is named Obsession. In the year 1988, when it was built, and still it is very successful platforms with a very large size propeller with a surface effect made of composite material, serving as the best boat in its class. They are successful in terms of not only their speed but also their performance in every respect from the Greek coast guard boats that are in front of them. There are 18 units within the Commandership.

These boats are 15,4 meters long, 4 meters wide, 18 tons in weight, can reach 54 nautical mile speed, 37 nautical mile fixed speed and 350 nautical mile range boats. They are cut out for coastal safety and fast intervention. Since they are very active, the high performances of the sailors who come from old class boats have difficulty getting used to them at the first time but they start to enjoy in time. They usually do not contain heavy weapons but there is a gun place on the upper bow deck. Its stability is unexpectedly good from this type of high-speed boat, so that it can perform all tasks without any problems even with 360-degree vision stabilized weapon platforms placed at the top of the boat in its samples exported abroad. It is one of the boat classes that is the most source of pride for our country. Very little revised version of this boat (Kaan 16) is used by Qatar Malaysia and the United Arab Emirates, and Qatar and UAE equipped these boats with stabilized weapon platforms.

The design, which was enlarged by the demands of the Coast Guard Command by the same shipyard, has become the craziest and fastest boat in its class with much more powerful engines. In sea trials it reached the speed of 61 nautical miles. The movements of the boat have softened even more, making it extremely ergonomic for a boat of this size.

It is 22.5 meters tall, 4.7 meters wide, weighs 30 tons and has a range of 350 nautical miles. Although it is not equipped with heavy weapons in our force, it is a boat that showed good export success like its younger brother. It is successfully used in the Egyptian and Georgian navies equipped with a stabilized arms platform that can rotate 360 degrees at the top. There are 10 boats in our command.

Satisfied with the performance of the Kaan class, the force decided to build larger ships in fast-type intervention boats and Kaan 29 class boats were built. While the first tender was made for 15 boats, 9 of them were produced and designed.

These boats, 31.5 meters long, 6.7 meters wide and 97 tons displacement, are boats with a range of 37 nautical miles and 500 miles that can reach 47 nautical mile speed. The Coast Guard Command started to use ASELSAN STAMP stabilized cannon system on these boats for the first time and gained an important multiplier. There are also two 12.7mm manual anti-aircraft guns on these boats.

It is the more extended and equipped with different engines version of the Kaan 29 class. 6 boats of the first tender which was 15-boat-tender was identified as this class. Later, 7 additional productions were made and the total number was 13. These boats, which are 35.6 meters tall, have the same width as Kaan 29 and have a displacement of 125 tons, have a speed of 45 sea miles and their range is longer than 500 nautical miles. While it is still used in our command with ASELSAN STAMP, ASELSAN STOP is a successful platform used in the export version of Qatar, which is one meter longer.

Names of Kaan class boats come from length of waterlines. Despite their light-hull structures, these boats are much more active than Greek boats with their good performance in high sea conditions.

Apart from these, we have DAMEN 19 class boats built with EU financial funds named as Search and Rescue Boat. Since they are manufactured for humanitarian purposes such as rescuing refugees, they do not have a fixed weapon system on them. It is the only non-Turkish designed (Antalya manufactured) marine vehicle owned by the Coast Guard command.

These boats, with a displacement of 19.5 meters and 24 tons, are made of aluminium. In my personal opinion, it appears to be more dangerous factors in rescuing people in panic in the sea in intervention in the irregular refugee influx which is their purpose of being built with hard angular hull forms that are built to serve in the high seas and the high side boards that can only be operated on the stern.

It is not fair to say bad for the boats. Even if capsized in the ocean, they are good sailor boats with self-healing structure. However, it is not a suitable boat type for the Aegean Sea where its main place of duty. I predict that it will serve for a long period of time since the boat selection is made according to the financier, not the requests.

It is a very successful coast guard boat of the time designed by Turkish Engineer Erbil Serter. The first boat was built in Abeking & Rasmussen shipyard in Germany and other boats were built in Taşkızak shipyard. Although they have started to withdraw, they still continue to show up in our seas. It is a coast guard boats with a serious combat load compared to other classes with a 40mm gun at the top and two units of 12.7mm anti-aircraft guns on the upper deck.

These boats are 35 meters long, 8.6 meters wide and made of steel displacement of 180 tons. It has a range of 450 nautical miles. Their solid structures have been serving for years. The smoke from their engines has a characteristic aspect.

They are the Sar 33 boats with extended ranges. Although there is a little loss of speed with the extension for longer range and comfortable interior volume, it has no effect on maritime performance. They have the same type of weapon equipment as the Sar 33. There are four units of them in the Coast Guard inventory. The first boat SG-71 has the classic old-style bridge superstructure, while the other 3 boats are different.

These boats are 35 meters long, 8.6 meters wide and made of steel displacement of 180 tons. They have ranges exceeding 500 nautical miles. They are suitable to serve for a long period of time with their solid structure and extended hull length.

It is a boat designed by Istanbul Technical University and Taşkızak shipyard. Despite its delicate form, it is one of the best boats of its class, which is quite sailor, economical, high speed, long range, more ergonomically designed to live at sea. Like Sar boats, there are 40mm guns on the top and two units of 12.7mm anti-aircraft guns on the upper deck. It also gained long surveillance capabilities with Aselflir which was added later. Moreover, the ships are equipped with water cannons for firefighting have cleaning equipment against marine pollution. It is one of the most equipped ships of its size.

There is a fallacy that they are enlarged versions of Sar boats since they are built after them. This boat is a completely new and successful design in form and functioning. There are 18 boats in the inventory.

Dost class ships are the flagships of the Coast Guard Command with their corvette sizes. They are the largest ships the Command has ever used. Four ships in this class (SG701 Dost, SG702 Güven, SG703 Umut, SG704 Yaşam) were produced by the RMK shipyard with the contract in 2007. It was redesigned for coast guard needs based on Italian Sirio class corvettes and built between 2010 and 2014. Although ships of this size may appear to be loaded with light weapons, it is acceptable since their task is to operate in times of peace. It is equipped with 40mm Bofors twin guns and two units of 12.7mm anti-aircraft guns. It is also the first ship of the Coast Guard Command with helicopter platform and hangar.

With its 88.4 meter length and 12.7 meter width with 1750 tons displacement, it has the ability to stay in the sea for a long time, and it is able to serve even in sea situations of 5 or more severity. In the past years, Umut and Yaşam successfully carried out their operations in stormy weather off the coast of Libya.

The Coast Guard Command works with vehicles with less variety and capacity as aviation platforms.

Having night vision FLIR systems and surface-mounted radars, these helicopters are equipped with salvage for air-sea rescue. Thirteen of them are in use actively. They can also work on Dost class ships. (In place of a lost helicopter, a UH-1 type helicopter was supplied.) 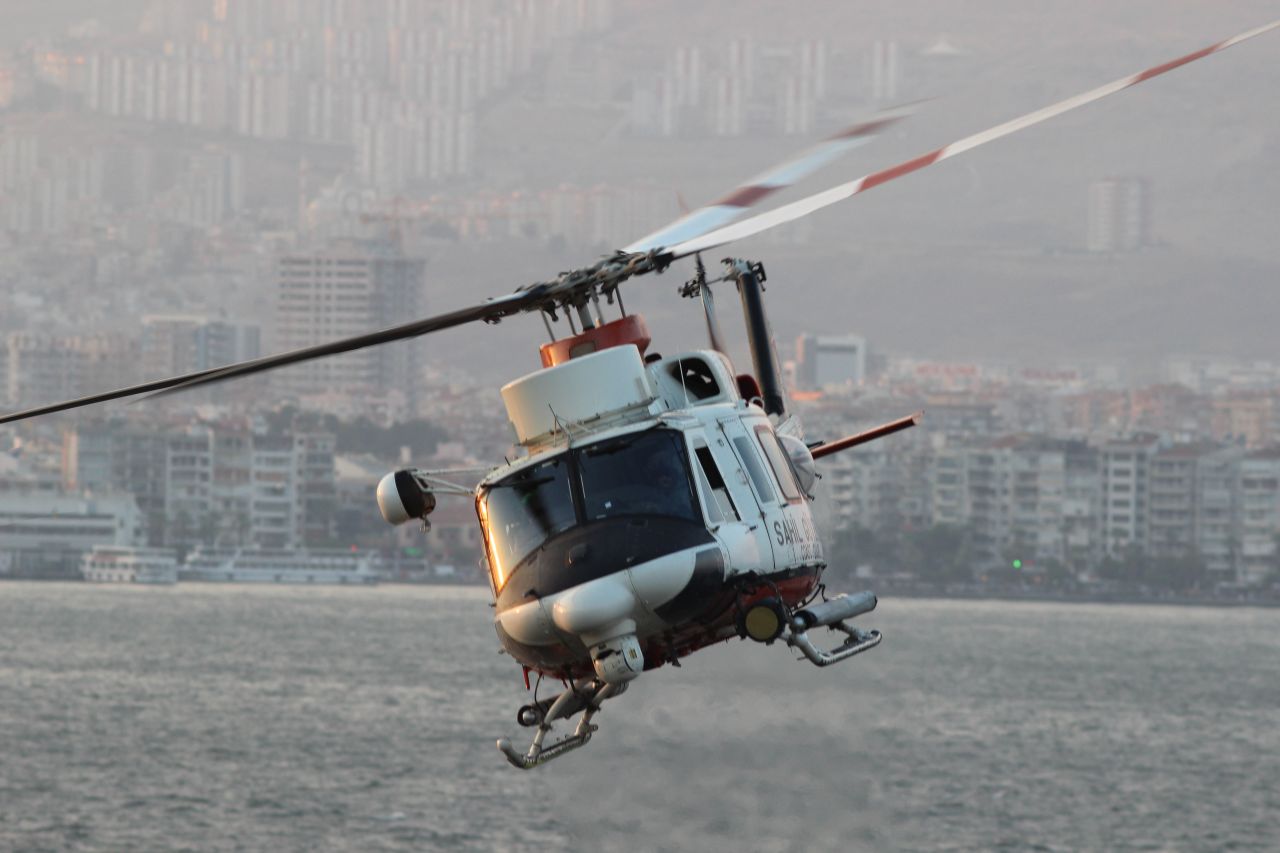 These planes are the most capable platforms which the Coast Guard Command has. These planes are equipped with Aselflir 200 and a very powerful surface radar. As an internal system, AMASCOS has a multi-combat mission operating system, which is also used in our navy for underwater warfare. Three aircraft are in use of the command.

If we look at the situation analysis after general equipment knowledge, the Coast Guard Command’s greatest skill and cornerstone is its devoted staff. These zealous staff, who have to work in a much harsher environment than a normal naval staff and which should be highly appreciated, had to try to cope with the substantial bureaucratic duties as well as their primary duties after being transferred to the Ministry of Interior. Even though the recruitment of specialized personnel and arrangements to improve the situation started in this year, the level required has still not reached. The most important danger is that qualified personnel tend to leave the foundation. 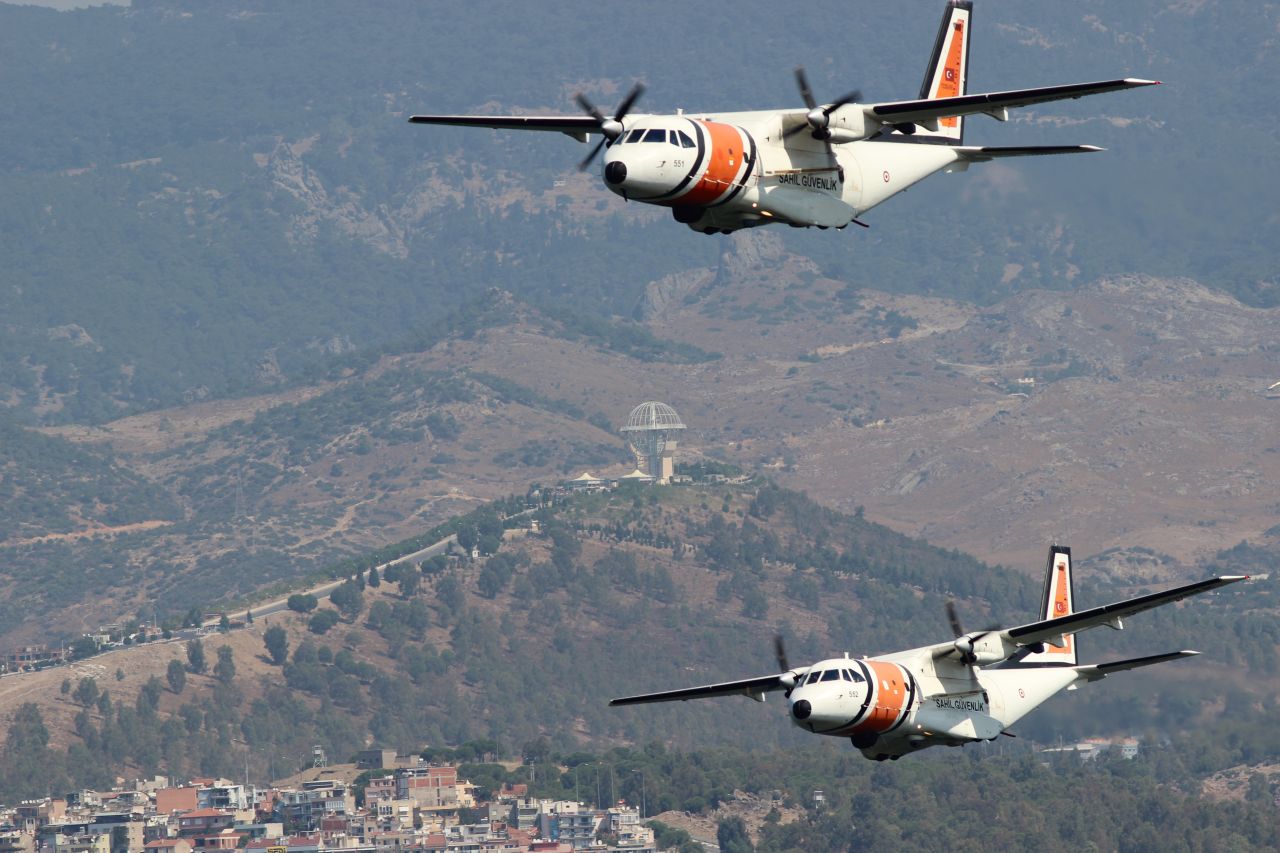 As the Command, the need for electronic intelligence systems has increased significantly. This type of equipment must be obtained both on land and at sea.

With a total of 4 corvettes, 100 ships-boats, about 75 small boats, 14 helicopters, 3 aircraft, 8 mobile vehicle radar and surveillance units, it has minimum acceptable facilities for today’s conditions. The skill capabilities and numbers of mobile radar systems need to be increased.

With the growth of exclusive economic maritime areas, the range and duration problem, which is one of the chronic problems of our marine aviation, has also manifested itself in the Coast Guard Command. The number and the range of helicopters and planes have become insufficient for long periods of duty and growing areas.

The Coast Guard Command should not be seen as just policing at sea. It performs tasks such as rescuing life and property at sea, ensuring security, showing the flag, preventing the decadent behaviour of other countries, combating crime, and Strategic and Operational Cooperation with other units with its devoted staff.

ASELSAN carries out works on “Smart Ammunition” in ground vehicles