The defense industry delegation, coordinated by the Defense Industry presidency, made an official visit to Azerbaijan. 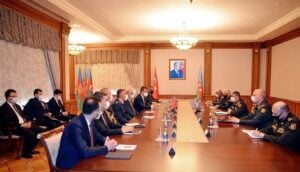 The success of Turkish Armed UAVs in Syria, Libya and Azerbaijan become hope for exports

AFP, which said that Turkey hopes to benefit from the success in Syria, Libya and Azerbaijan for the export of AUAVs, shared that unmanned aerial vehicles through Turkey’s increasingly assertive foreign policy domain to strengthen the chances of the offer as well as the proven ability to destroy enemy tanks on analysts. Defence Industry Presidency President Prof. Dr. İsmail Demir stated in an interview with AFP that Turkish AUAVs deserve their money.