In the statement made by Baykar Defence Technical Manager Selçuk Bayraktar, it was stated that the trainings were carried out with 65 sorties in the first week.

It was stated that AKINCI UCAV operators made their first flights on April 26, 2021 and the trainees made 9 sorties in total. The first flight and taxi training day of the operators also coincided with April 26, World Pilots Day.

Within the scope of the project carried out under the leadership of the Presidency Defence Industry Presidency, Bayraktar AKINCI UCAV, developed by BAYKAR with domestic and national means, successfully completed the first firing test on April 22, 2021.

It Launched with Smart Ammunition

Bayraktar AKINCI, Turkey’s first unmanned combat aerial vehicle, took off with one MAM-C, one MAM-L and one MAM-T smart ammunition developed by Roketsan for the first firing test. The first flight of the ammunition flight test campaign was performed on April 17 with AKINCI PT-3. While the second test flight with ammunition was made on April 21, the first shots were carried out on April 22, 2021. 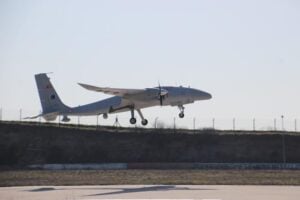