NATO: “Turkey assumes the defence of the EU’s eastern flank”

NATO Secretary General Stoltenberg said that all flanks of the organisation are defended by non-EU countries of NATO such as the USA, Turkey and England, stating that European Union cannot defend Europe on its own.

As reported by Deutsche Welle Turkish, NATO Secretary General Jens Stoltenberg gave important messages regarding the demands for “strategic autonomy” led by France within the EU. Stating that the defence of Europe is not based on strategic autonomy but on transatlantic ties, Stoltenberg said that most of the EU countries are also members of NATO and that the security of their citizens depends on an alliance far beyond their own capitals.

Speaking to the AFP agency, Stoltenberg emphasized that more than 90 percent of the EU population lives in a country which is a NATO member but EU member countries cover only 20 percent of NATO defence spending.

Stoltenberg, the former prime minister of Norway, which is not a member of the EU, stated that he preferred the term “strategic solidarity” instead of “strategic autonomy”. “I do not believe in an EU on its own. I don’t believe in a North America which is on its own either. I believe in North America and Europe, which are together in strategic solidarity within NATO. He also said that he does not believe that any country or continent can cope alone with the challenges currently faced in the security field. 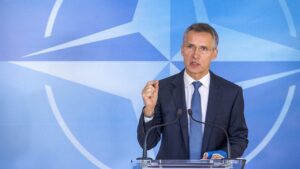 While stating EU’s fronts are defended by non-EU members of NATO, like the USA, Turkey and England, from Northern Atlantic to Russia, Stoltenberg also said that the south-eastern flank is also defended by Turkey which is not an EU country. He pointed out that Turkey has an extremely important role in the fight against international terrorism and ISIS and that it shares borders with Syria and Iraq.

“But the most important thing is the political side of the issue. Because any attempt to weaken and to break the connections between Europe and North America will divide not only NATO but also Europe.” warned Stoltenberg.

Stating that he takes kindly the EU’s efforts to increase defence spending and activate the defence industry, Stoltenberg said “I support the EU’s efforts in the field of defence. Because increasing defence spending, creating new military capacities and taking measures against the fragmented appearance in the European defence industry is a good thing for Europe’s security, for transatlantic security, for all of us. Ultimately, we welcome all these efforts as long as they complement NATO. But the EU cannot defend Europe.” he said.

Incidents such as the friction which was experienced with the USA during the presidency of Donald Trump, the tensions in the Eastern Mediterranean with Turkey and the UK leaving the EU caused the idea of strategic autonomy to come to the agenda within the EU. 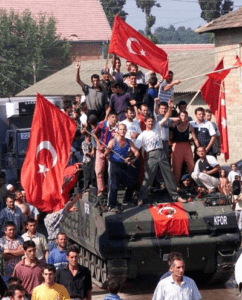 French President Emmanuel Macron said “NATO is experiencing brain-death” regarding the issues of the US troop withdrawal decision from Syria and Turkey’s Peace Spring carried out in Syria in 2019 and he criticized that these decisions were not consulted with the allies. Following this comment of Macron, reform debates broke out in NATO.

Stoltenberg told AFP that NATO faces many other enemies, stating that “Russia’s harassment against its neighbours, international terrorism, cyber-attacks, the effects of climate change on security and the need to protect the advantage against rising China” counted as an example.