by defence_admin_turk
in Coast Guard and Patrol Boats
0

ONUK MRTP22/U is designed to operate in tropical waters to fulfil the following duties:

ONUK KO-03 deep “V” hull has been the basis of the exceptional strength and sea-keeping of the “Kaan20″ Class ONUK MRTP20 Fast Intervention Craft of the Turkish Coast Guard. As of July 2008 three of ONUK MRTP20 are in service in Turkey and abroad and the production continues for Turkish and foreign customers. Tank tested to 85 knots the ONUK KO-04 hull and structure is a very substantial improvement over the well proven ONUK KO-03. 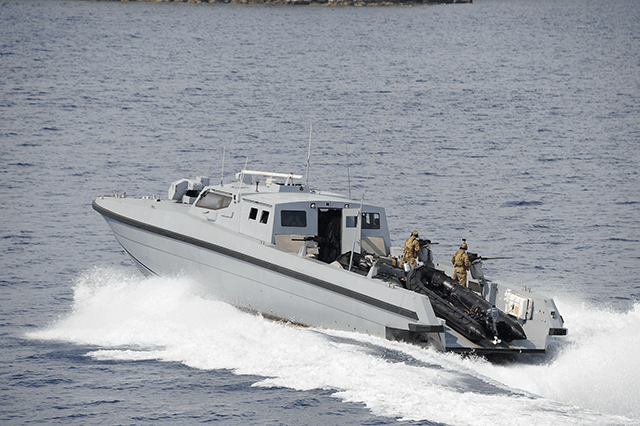 The advanced composites hull and superstructure are designed and constructed to Det Norske Veritas (DNV) rules. All the boats of the series are delivered with the relevant DNV Certificates.
Depending on engine/configuration selection, the proven ONUK KO-04 deep V hull will enable the boat to reach speeds up to 70 knots in calm waters and above +50 knots in Sea State 3, allowing rapid reaction comparable to a helicopter, and can be used in confined spots or heavy weathers not suitable for helicopter operations.

The foreseen developments for the next five years concerning the engine and drive system technologies have been taken into consideration in the design of ONUK MRTP22.

Speed and seakeeping:
In order to enhance the Multi Mission Capabilities (SAR, Environment protection, Patrol, Attack etc.), increased mission payload and accommodation space/facilities have been provided.
Commercial and Turkish / NATO naval standards have been applied to the ONUK MRTP22 for the intact and damaged stability. ONUK MRTP22 meets the Turkish Navy and NATO criteria for damaged stability and will remain afloat and upright with flooding in any single main compartment.
ONUK MRTP22® is built in advanced composites to satisfy the very tough requirements of an intensive professional use together with a long service life. The benefits of the advanced composite structure are:

The hull and superstructure are constructed in accordance with the Det Norske Veritas (DNV) rules. All boats of the series are delivered with the relevant DNV Certificates.
A large shock resistant fender system will enable the ONUK MRTP22 to board safely larger vessels in rough waters.

Machinery and propulsion
The mechanical components are selected with the intensive professional use in mind. They offer a high level of reliability, despite the extreme performance requirements.
In the standard configuration, the propulsion is by twin Diesels, (2x1790kW) + Arneson Surface Drives ASD15 + Rolla propellers. Depending on the speed requirements, the ONUK MRTP22 can be equipped with different engines driving through ASD or MJP Water Jets for optimum operational efficiency / price ratio.
ONUK MRTP22 can be equipped with various mission modules depending on the customer requirements. Despite the size of the platform, these modules have been integrated with the modularity and reconfigurability objectives in mind. Thus, the platform can be reconfigured with different mission modules, increasing dramatically the operational flexibility and reducing the costs.
The following weapon and surveillance system could be installed on ONUK MRTP22