Minister Çavuşoğlu: The European Union has no authority over maritime jurisdictions

by Elifnur Başaran
in General, News
0

Being a guest of the program “Nedir Ne Değildir” on Habertürk TV, Ministry of Foreign Affairs Çavuşoğlu answered the questions of the journalists about UN and Eastern Mediterranean.

Stating that Oruç Reis is in a maintenance of 6-month, Çavuşoğlu made the following assessment according to the statements and the information given by the Republic of Turkey Ministry of Energy and Natural Resources:

“As far as I know, Oruç Reis is in a maintenance of 6-month. We make statements on this subject according to the information provided by the statements of our Ministry of Energy. The findings are examined in detail at the end of the searches, then if there is a possibility of hydrocarbon, gas or oil, at this point, then the drill ship goes there. Finally, we have found a strong reserve in the Black Sea, hopefully it will continue. Internal policy and foreign policy are intertwined. It is also the same in this world, it is inevitable. Any development in the outside world affect Turkey. We showed the whole world what we can do on our own continental shelf and that nothing can be done despite us. The whole world has seen it. “

“The European Union has no authority over maritime jurisdictions.” 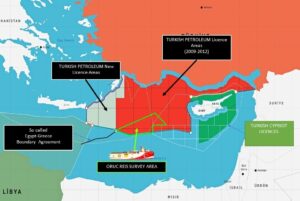 Referring those statements which are “Greece states that this Court of Justice recognizes the jurisdiction but has made annotations on three issues; continental shelf, airspace, status of demilitarized islands.”, Çavuşoğlu made these evaluations: