Minister Akar: “Those who menacingly speak to us should look at their own history.”

Minister of National Defense Hulusi Akar made statements at the Training Year Ceremony of the Amphibious Marine Infantry Brigade Command.

“We don’t threaten anyone”

Minister Akar, recalling that 4 major joint and joint exercises had been held in the last 15 days in the Eastern Mediterranean, gave the following information: “These exercises are nothing but threats. We are talking about friendship, good-neighborly relations, we are responding with armament, increasing military stacks and exercises. These are, of course, things that escalate the tension. The things to do to prevent the tension from escalating are simple; focusing on dialogue, mutual negotiation, political solutions, working on these issues. Otherwise, it should be known that these may have troublesome consequences. “
Underlining that to prevent Turkey’s tensions from escalating to that they continued to make suggestions, patiently activities  Ministers Akar, said: “The dialogue, on the one hand, is about the reduction of tension in our NATO alliance, on the other hand, many ignoring even violent agitation, which causes voltage action And our patience is being tested with rhetoric. I also want to point out that this is not a suitable way at all. It is not a weakness that we adhere to international law, be patient, and talk about good neighborly relations. It is not a threat to say that we will not allow any fatalities and that we will follow whatever we are entitled to. We’re not threatening anyone. We just say that we have rights and protect them within the framework of international agreements, court decisions, practices. It is not appropriate to translate this as a threat, nor does it reflect the truth. “ 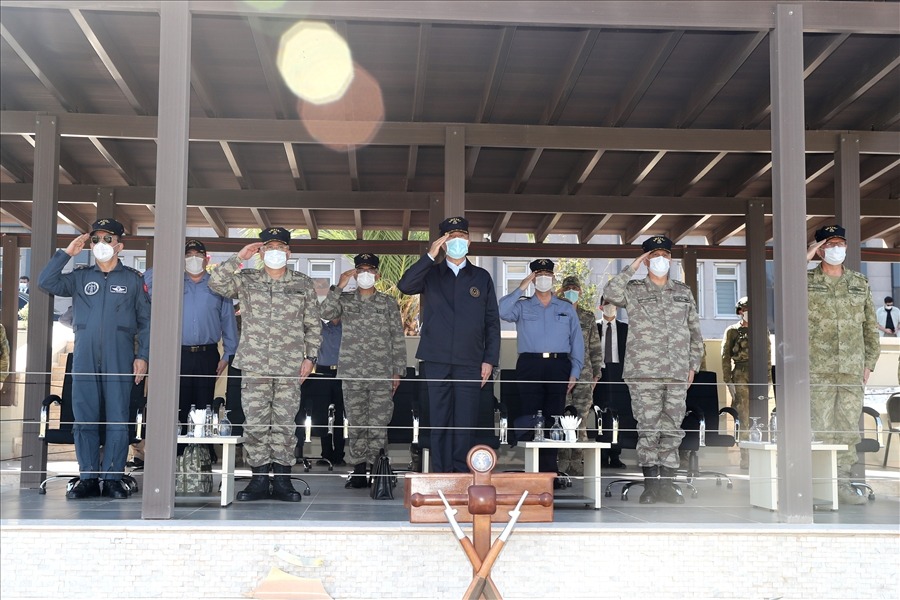 “You are trying to get a role in the Eastern Mediterranean”

Minister Akar pointed out that some states that are not closely related to the region had come to these places and said, “Everyone should know that coming to these places and operating in pursuit of various roles will not help peace and stability in any way; on the contrary, it will increase and escalate the tension. You come from thousands of kilometers and try to capture a role in the Eastern Mediterranean. By what right? Do you have the authority to represent your shore? No. Everyone should know that the movement here is an effort to take on a role. I would like to bring to your attention that everyone should know that this will not only provoke people but increase the problem here. ”

Minister Akar continued: “Those who try to take on this role are fueling the activities and crises in Libya, Syria, the Mediterranean and Africa with their actions and discourses. They said ‘freedom’, where is freedom, they said ‘peace’ where is peace? By ignoring all of these, they act against the spirit of alliance, against the discourses of freedom and peace, and we need to see this. All of these actions delay the political solution and contribute negatively to the political solution coming soon. “

Minister Akar, who once again stressed that Turkey is in favor of peace and stability in the region, added:
“It would be very wrong to try to solve today’s problems with old templates, formulas and models. Nobody should try this. A lot of water flowed under this bridge, old pines became cups. Everyone should keep this in mind. Everyone should know that the colonialist and slave mentality, which does not recognize rights, law, equality and freedom, is coming to an end and that these are no longer in circulation. Those who speak to us in the language of threat should look at their history and meet with their ancestors. They should ask their ancestors what we are doing on this matter ”.

Turkey, while 4 million Syrian guests, 3-5 refugees took refuge in the neighboring countries of rip-roaring pointed out that Minister Akar, “the world and thıse wanting to cover up political bankruptcy at the front of their public inefficient are attempting a variety of actions were contained in the discourse. They try to put strife in our unity and integrity by going beyond their limits and lengths. These words aimed at sedition have no equivalent in our nation’s mind. Also, these are no use.  Hafter the PKK / YPG supports you fail to arrive somewhere and accusing Turkey consequently not possible. In no way, it is not possible to cover up what they have done. We are sure that both the world public opinion, we and the domestic public opinion see this. As at the date against Turkey entering into various calipers will be frustrated today. Some of them just need to be silent to lower blood pressure. They don’t need to do anything, just keep quiet. In the meantime, we strongly recommend that our neighbor Greece does not use itself for the sake of some countries’ interests and that Greece does not have appetizers, for this reason, we remind them of this. We hope they are aware of this ”.

“We have protected it until today, and we are determined to protect it from now on.”

Saying that it is necessary to learn from history, Minister Akar said, “They know what we did in 1974 despite all the impossibilities and difficulties. Therefore, nobody doubts that we will protect our rights and interests to the end with the opportunities and capabilities we have today in the activities to be carried out in the upcoming period, and we have no doubt that you will protect our rights, interests and interests as you will make great sacrifices and heroism in this regard.” He said, “We have always protected the legitimate interests and interests of both our brothers and sisters from TRNC under international law until today, and we are determined and able to protect them from now on.  ”

Visit to the Aegean Army

The opening ceremony of the new training year of the Marine Corps, which was held, ended after the demonstration of free-floating training from helicopters, prayer and sacrifice ceremonies.