Minister Akar: “Our Land Forces; It makes a great contribution to regional and global peace and stability in many geographies as well.”

Minister of National Defence Hulusi Akar published a message on the occasion of the 2230th Anniversary of the Turkish Land Forces Command.

Despite the pandemic conditions, the Turkish Land Forces made a great contribution to regional and global peace and stability in many geographies such as Afghanistan, Kosovo, Bosnia-Herzegovina, Azerbaijan, Libya, Qatar and Somalia within the framework of the UN, NATO, OSCE, EU and within the scope of bilateral agreements.

Minister Akar stated that simultaneously with all these activities, he continued his training/practice activities uninterruptedly and successfully in order to improve the qualifications of his personnel in the most appropriate way to the conditions of the age and the changing nature of the war. And he made these statements:

“Dear Fellow Soldiers and Colleagues, I sincerely congratulate the 2230th anniversary of the establishment of our Land Forces. Our Land Forces, whose foundations were laid by Mete Han; It is one of the most respected military forces in the world, with its heroic and devoted personnel, committed to its deep-rooted history, national, moral and professional values. Our Land Forces; It has struggled with determination at home and beyond the borders against all kinds of threats and dangers to the security of our homeland, borders and noble nation. In this context, our heroic Land Forces which is equipped with high-tech domestic and national defence industry products added new and great achievements to its glorious history with the large-scale operations it carried out within the scope of the fight against terrorism. With these operations carried out in Syria and the north of Iraq, the terror corridor which was desired to be established in the south of our country has been shattered; The security of our borders, our noble nation and the innocent and oppressed people of the region, who depend on us for their hope, has been ensured.” 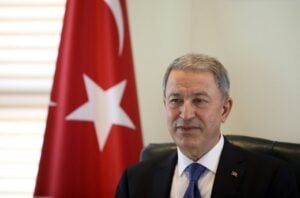 “Our Land Forces bring peace, justice and tranquillity to everywhere.”

Minister Akar, will successfully fulfil any task that will be given to him, as he has done so far, and will continue to be a source of pride for our country. he said he would. He added:

Inspired by the love, trust and prayer of his noble nation and the ancestors of the Turkish Land Forces who brought peace, justice and tranquillity to seven climates and three continents, Minister Akar said that he would continue to be a source of pride for our country and would successfully fulfil any task that will be given to him, as he has done so far. He also added:

“On the occasion of this anniversary, I remember with respect all our commanders and statesmen who have contributed to the achievement of this level of our Land Forces, from Mete Han to Sultan Alparslan, from Gazi Mustafa Kemal Atatürk to the present. I commemorate with respect our martyrs, our heroic veterans, who have passed into eternity, with mercy and gratitude; and I would like to express my respect and gratitude to our hero veterans who are still alive and to the precious families of our martyrs and veterans. the Commander of the Land Forces, General Ümit DÜNDAR being in the first place, congratulations to all the active and retired personnel of our Land Forces. I wish them and their precious family members health, success and well-being.”