STM, which is exporting Türkiye’s first and only submarine modernization project to date, has completed the modernization of the second AGOSTA 90B Class submarine owned by Pakistan, equipping it with modern and state of the art systems, and has delivered it to the Pakistan Navy.

Güleryüz: Third submarine next in line

“As we continue our journey on which we set out for the sake of our country’s defence, we are also transferring our engineering experience and technologies to friendly and brotherly countries. The Pakistan Navy Agosta 90B Class Submarine Modernization Project is one of the most important examples of STM’s national and international competency in submarine production and modernization.

Within the scope of the AGOSTA Modernization project, which stands out as Türkiye’s first submarine modernization engineering export project involving strategic and high-tech systems, we have successfully equipped the second submarine with modern systems after having delivered the first to the customer in 2021. We delivered the second submarine to the Pakistan Navy on time under the project, which we have been carrying out in collaboration with nearly 50 local and foreign companies and suppliers, despite the COVID-19 pandemic, which has had a global impact in every field. While exporting the systems of numerous domestic companies through the AGOSTA 90B Modernization project, we are continuing our works in Pakistan with a view to completing the modernization of the third and last submarine on schedule. I congratulate all of our stakeholders and employees who have contributed to the project. I hope PNS/M KHALID, which has begun to carry out its naval missions, will be beneficial to the friendly and brotherly Pakistan Navy.”

Submarines Equipped with the Most Advanced Systems

STM was awarded the submarine modernization contract in 2016, paving the way for the exportation for the first time of Turkish engineering products in the highly advanced technological field of submarines. The contract for the mid-life upgrade of a single Agosta 90B class submarine was later expanded to include the modernization of the second and third submarines. Under the modernization project, various sensor and weapon systems are being upgraded, involving the integration of state-of-the-art systems that have been installed and integrated by STM.

The submarines’ sonar suites, periscopes, command and control systems, naval data distribution system, converters, steering control system, chilled water system and radar & electronic support systems are all being replaced, and systems produced by numerous indigenous and national companies, including ASELSAN and HAVELSAN are also being exported under the scope of the Project. All hull-related structural modifications, materials and workmanship activities carried out on the submarines under the modernization project have been certified by the international classification society DNV (Dat Nordske Veritas). The project is continuing at the PN Dockyard Shipyard of the Pakistan Navy using local workmanship of PN Dockyard , where engineering, design, material, documentation, training  and technical support is being provided by STM.

The first Agosta 90B Class Submarine PNS/M HAMZA (S-139), modernized by STM for the Pakistan Navy, participated in the SEASPARK-2022 Tactical Exercise, during which it successfully fired a torpedo and sank a decommissioned frigate.

As part of its design, construction and modernization activities, STM is producing indigenous and flexible engineering solutions for the surface and submarine platforms of the Turkish Navy, and those of friendly and allied nations, aiming to address specific operational needs and ensure more effective mission performance. Undertaking crucial tasks in the submarine modernization and construction projects of the Turkish Navy, STM successfully completed the modernization of two “Ay”-Class submarines in the role of main contractor in 2015. Presently carrying out system procurement and platform integration activities as a pilot partner in the modernization of four “Preveze”-Class submarines, STM is also undertaking important tasks in the New-Type Submarine Project (Reis Class) Project for the construction of submarines equipped with air-independent propulsion systems (AIP). STM has successfully carried out integration design, engineering and system integration activities on the Turkish Navy’s latest modern submarine design – the Reis-Class submarine – and has indigenized the construction of the bow, or “Section 50”, which houses the submarine torpedo tubes (main weapons), being a component that can only be produced by a few countries in the world, and has delivered it as part of the Project. 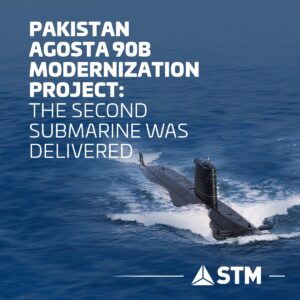 STM has been serving the Turkish defence sector for over a quarter of a century in areas that include engineering, technology and consultancy services, working in fields that are critical for Türkiye and its allies. It applies its advanced capabilities and technologies to a broad range of strategic fields, ranging from naval platforms to satellites, from tactical mini-UAV systems to cybersecurity, and from big data analytics to artificial intelligence applications.

Hulusi Akar's explanations on the procurement of Type 23 class frigates