ASELSAN 2020 Annual Report has been announced. Important statements were made in the annual report under the heading “Long Range Regional Air and Missile Defence System“.

Today, it was announced by Defence Industry President Prof. Dr. İsmail Demir that an air defence system with a range of 100 km and an altitude ceiling above 20 km was developed as an intermediate product before the SIPER.

A national and domestic system will be developed within the scope of the National Long Range Air Defense Missile System-SIPER project, which is being carried out with a business partnership model under the contracting of ASELSAN-ROKETSAN-TÜBİTAK SAGE. In ASELSAN’s report it is stated that “The first prototypes of the ground systems under ASELSAN’s responsibility are planned to be produced and tested in 2021.” 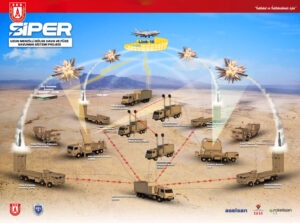 Portable/ Early Warning Radar System (T/EİRS), which will also be positioned independently for early warning purposes, will also be used in the SİPER project. The search radar T/EİRS system, which is an important element of the aforementioned ground systems, started testing last year. EİRS (Early Warning Radar System), which will also form the T/EİRS ÇAFRAD system (Portable/Early Warning Radar System Multi-Functional Phased Array Radar) Long Range Search Radar (UMR), is in a critical position in this respect. In addition, important components such as fleet control center, fire control center and communication relay vehicles are expected to be developed and produced by ASELSAN within the scope of the project.

During President Recep Tayyip Erdogan’s visit to France in January 2018, a Concept Definition agreement for the Long-Range Air and Missile Defense Project was signed between Eurosam and its Turkish partners Aselsan and Roketsan, the duration of which is 18 months. The project was prolonged due to political reasons, and it was reported to the public that there were disruptions due to the political stance of France.

System concept definition work is carried out within the scope of the “Concept Definition” Project contract, which is carried out under the contractor of ASELSAN-ROKETSAN-EUROSAM. The last phase of the project, the first two phases of which have been completed, continues.