Latvian Defense Minister Artis Pabriks expressed his satisfaction of his visit to OTOKAR in a statement after the visit and said, “We are looking forward to testing Turkish military vehicles in Latvia.”.

Being one of the Koç Group companies, Otokar is Turkey’s leading automotive and defense industry company. It operates in more than 60 countries in 5 continents, with its products whose intellectual property rights belong to it. 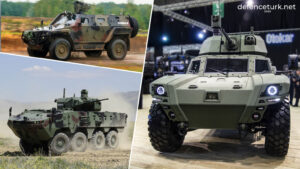 Artis Pabriks, Deputy Prime Minister and Minister of Defense of Latvia, also met with Minister of Foreign Affairs Mevlüt Çavuşoğlu within the scope of his visit to Turkey. After the meeting, Minister Çavuşoğlu said, “We evaluated our relations and cooperation opportunities in the defense industry.” He also said, “We will improve our cooperation with our second NATO Ally, Latvia, which is interested in our drones.” in his statement.

Following the statements of Minister Artis Pabriks, it is considered that Latvia will become the second NATO country to supply Bayraktar TB2 UAV/UCAV systems.

Latvian Defense Minister Artis Pabriks made a statement after his visit to Baykar Defense on 7 June 2021: “Thank you for the wonderful reception! Turkish industry has the highest world standards in research and development, and we value that very much as an ally in NATO. I wish you all success!” he said.

Latvia, which is located on the eastern flank of NATO’s border with Russia and has a population of around 2 million; it is among the countries that feel the threat of Russia the most, along with Lithuania and Estonia. In 2020, against this threat, NATO increased its activities in the Baltic Sea region. It continued to sustain a four battalion-sized multinational and combat-ready combat group led by the United Kingdom in Estonia, Canada in Latvia, Germany in Lithuania, and the United States in Poland.

Recently, 4 sets of (24 UAVs) Bayraktar TB2 were sold to Poland, which felt the threat of Russia most seriously.