Otokar Arma is being tested in Kazakhstan.

The Ministry of Defense of the Republic of Kazakhstan stated that Arma 8×8 carried out tested,  “Turkish company ‘Otokar’ is ready to send a pattern of a wheeled armored vehicle ‘Arma’ to the Kazakhstan Armed Forces free of charge for a military operation carried out experimental purposes.”

The Ministry of Industry and Infrastructure organized practice by the experts of Armed Forces the Republic of Kazakhstan on the combat capabilities of Arma Armoured Combat Vehicles (ACV) with 8×8 rim formula produced by Turkish company Otokar in order to monitor the armored wheeled vehicle market.
For the test, A vehicle with the ASELSAN NEFER turret integrated was used in the fire support and vehicle modification. NEFER had previously been tested in Kazakhstan with the Shipunov 2A42 30mm automatic cannon. The Ministry stated that Arma had reconnaissance, command and control, personnel transport, engineering, evacuation and amphibious options. 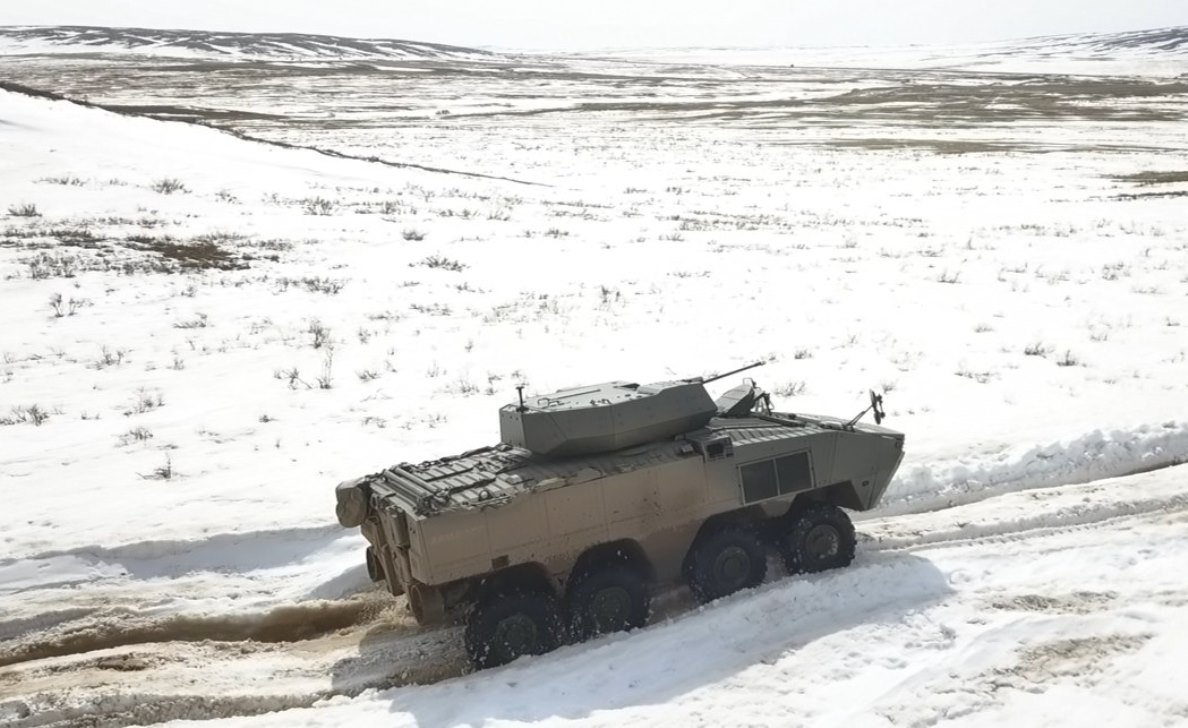 The first tests were carried out in March 2020, at the training ground in the Karaganda region, with practical shots day and night on a 6 km route with a snow cover 30-65 cm deep, where the practical firing was conducted during day and night.
The Working group of the Ministry of the Republic of Kazakhstan affirmed the compliance of the presented armored wheeled vehicle with the declared characteristics.
According to a statement made by the Ministry, Otokar offers experimental operations free of charge, including tests to overcome water obstacles, to thoroughly examine the tactical, technical and operational capabilities of the Arma Armoured Combat Vehicles.
Kazakhstan’s wheeled ACV supply
Kazakhstan has been testing different vehicles for the supply of tactical wheeled armored combat vehicles for a long time. One of the first vehicles Kazakhstan’s tested for the ACV was the Mbombe 8×8 vehicle of Paramount Group, partnered for local production in the country. Different weapon systems ranging from 30mm to 57mm were integrated into the vehicle for Kazakhstan.
One of the weapon systems integrated into the vehicle was the ASELSAN, which was again produced in the country with a local partnership.
Kazakhstan it uses Arlan 4×4 mine and Ambushes Protected vehicles manufactured by Paramount Engineering – KPE of Kazakhstan. Kazakhstan also has Otokar’s Cobra 4×4 tactical wheeled vehicle (40 units) in inventory.
Tags: acvAFVASELSANKazakhstanThe Ministry of Defense of the Republic of KazakhstanTurkey