The Israeli Ministry of Defence announced on February 25, 2021 that Lockheed Martin’s heavy transport helicopter CH-53K King Stallion has been selected as the new transport helicopter of the Israel Defense Forces (IDF) and it will take the the place of the current “Yas’ur” (CH-53) In the press statement made by the ministry, it was reported that Defence Minister Gantz had listened to the recommendations made by IDF Chief of Staff Aviv Kohavi and Defence Ministry General Director Major General Amir Eshel for the selection of CH-53K as the new heavy transport helicopter of IDF. 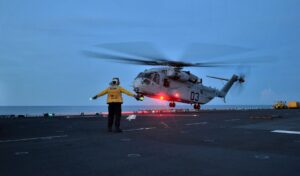 Minister Gants said: “This is very important for the IDF to be able to carry out a wide variety of operational activities. The new helicopter has been adapted to the Air Force’s functional requirements and the challenges of the changing battlefield.” Also, he added that the decision in question was made after a comprehensive administrative study where Israeli Air Force personnel examined various platforms and evaluated in terms of technology, engineering, maintenance, etc.

The CH-53K King Stallion is a new heavy transport helicopter developed by Sikorsky, a unit of Lockheed Martin, for the American Marine Corps. It is designed to increase the fleet’s ability to transport more material faster. Three new General Electric T-408 turboshaft engines are used on the CH-53K, which are more powerful and more efficient than the T-64 engines which are currently on the CH-53E. As Sikorsky points out, the CH-53K King Stallion is the most modern, capable and powerful heavy transport helicopter on the market.

The CH-53K King Stallion is the most load-carrying helicopter ever produced by the US government. This feature is a great advantage in that the navy can ship more materials in less time.