The Israel Missile Defence Organization (IMDO) and the US Missile Defence Agency (MDA), under the Defence R&D Directorate (MAFAT) of the Israeli Ministry of Defence, started the development of the Arrow-4 system.

The Israeli state constantly needs an air defence system with high prevention capability due to its geographic situation and threat perception. The Arrow program has emerged as a product of these needs. In 1986, the State of Israel began the development of the Arrow anti-ballistic missile with the United States. The Israel Missile Defence Organization (IMDO) and the US Missile Defence Agency (MDA), under the Defence R&D Directorate (MAFAT) of the Israel Ministry of Defence, have started the development of the Arrow-4 system. It was officially announced on February 18, 2021, with a post by Israel Aerospace Industries (IAI). Arrow-4 anti-ballistic missiles are expected to take the place of Arrow-2 missiles in the future. It will be carried out by IMDO and US MDA, with IAI as the main contractor for the development and production of the program.

The abundant SCUD ballistic missiles in the hands of the neighbouring countries were a major threat to Israel. In the Gulf War in 1991, Saddam Hussein’s government fired 39 units of SCUD missiles towards Israel and 2 Israeli citizens died. When we look at the countries where Israel had problems today and, in the past, we see the existence of SCUD missiles in most of them. This situation remains to be a serious threat to the State of Israel. Israel has set up a layered network of air defence systems to prevent the missile threat from around it. The Arrow Weapon System is a central part of Israel’s multi-layered defence system. The defence system is based on four operational layers: Iron Dome Defence System, David’s Sling Missile System, Arrow-2 and Arrow-3. 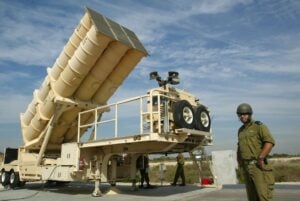 The program, which was created in 1986 in order to prevent the existing ballistic missile threat toward the State of Israel, started with the partnership of Israel and the USA. The system was introduced as a more effective missile defence system than the Patriot air defence platform. The Arrow-1 system went through a full-scale development and pre-production process with the joint funding from the United States and Israel after a successful demonstration test. The program, which has received more than $ 3.5 billion of the US financial support since 1990, constitutes the top layer of Israel’s layered air defence system. The Arrow-1 anti-ballistic missile was designed to intercept short-range ballistic missiles such as Scuds. One of the systems which was first delivered in 2000 was located in Tel-Aviv and the other one in the south of Haifa.

Arrow-2 is a US-Israel-developed system designed for the destruction of short and medium range ballistic missiles. The missile, which consists of 9 times the speed of sound, has a 2-stage solid fuel rocket engine propellant. The missile is 7 meters long, 0.8 meters in diameter and weighs 1300 kilograms. The system, which tracks the targets from 500 kilometers, prevents with a missile which is 9 times the speed of sound at an altitude of 48 km. The Arrow-2 has a terminal guided interceptor warhead that explodes 40 to 50 meters from its target. The range of the system is much greater than the US-made Patriot / PAC-2 systems previously used solely by Israel for missile defence, and allows the Arrow-2 to provide high-level defence against ballistic missile threats over a wide area. 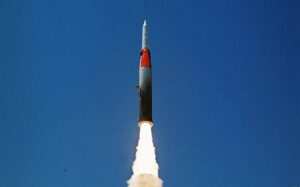 Arrow-3, an advanced version of the Arrow-2 missile, is a US-Israeli system which was designed to intercept medium-range ballistic missiles. Today it constitutes the top tier of Israel’s layered air defence. Unlike its predecessor Arrow-2, Arrow-3 has a longer range and has the ability to prevent incoming threats outside the atmosphere. Arrow’s all system components have mobile or semi-mobile capability, allowing easy replacement of system components. The Arrow anti-ballistic missile system consists of multiple systems to identify, track and block missile threats: Green Pine, Citron Tree

IAI Electronic Group’s subsidiary Elta Electronic Industries developed the Green Pine early warning and fire control radar for the Arrow system. The radar which is named EL / M-2090, is integrated into a vehicle. It includes the radar and antenna array, power generator, a cooling system and a radar control center. Green Pine is an electronically scanned solid state phased array radar operating in the L-band in the range of 500MHz to 1,000MHz. Radar operates in search, detection, tracking and missile guidance modes simultaneously. The radar can detect targets at distances up to approximately 500 km and track targets at speeds above 3,000 m/s. The radar lightens the target and directs the Arrow missile within 4 meters of the target. 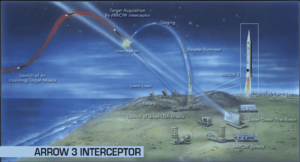 When a missile launch is detected, the launch site, the missile’s position and trajectory, and the predicted impact point are displayed on the electronic map. The predicted impact point is displayed as an ellipse on the map. As the missile’s trajectory stabilizes and trajectory data becomes available, the size of the impact ellipse becomes smaller. The orbital image has compatible colour with the image of the launch site. The optimum intersection point is also displayed. The center can control up to 14 intersections at the same time.