The US Department of the Treasury announced the CAATSA sanctions list on December 14, 2020. In the announced list; İsmail Demir, President of Defence Industry, Serhat Gençoğlu and Mustafa Alper Deniz from the Air Defence and Space Department, Defence Industry Vice President and Chairman of Roketsan Faruk Yiğit were included. The Foreign Affairs Minister of the Islamic Republic of Iran Mohammad Javad Zarif stated that they condemn the US sanctions against Turkey, on the post he shared on his official Twitter account on 15 December 2020. Minister Zarif also stated that they are with Turkey.

In the statements of Minister Javad Zarif, it is said: “The US fully demonstrates its commitment to sanctions and to belittling international law again. We strongly condemn the sanctions that the United States apply towards Turkey recently. We stand by the Turkish people and government.”

Turkish Presidential Spokeperson İbrahim Kalın also shared on his official Twitter account. Saying that the sanctions would affect adversely, Kalın said that “Turkey’s defence industry capacity development, diversification of resources, reducing dependence and the commitment to increase its self-sufficiency will not change.”

Making a statement regarding the issue, Minister of National Defence Hulusi Akar said, “We condemn the sanction decision of the USA, which is incompatible with the alliance, the existing military and political realities and the security of the NATO alliance due to the supply of our country’s S-400 Long Range Air and Missile Defence system.” 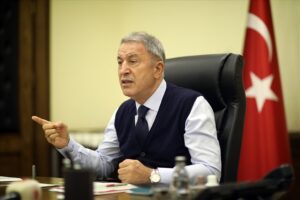 Stating that our country is under serious air and missile threat, Akar stated that all necessary measures are and will be taken for the security of the country and our citizens. Minister Akar emphasized that the sanction decision undermined all values of the alliance between countries. “However, efforts to ensure the defence and security of our country and our noble nation will continue with determination.”

In the statements of Minister Hulusi Akar, “Returning to cooperation and solidarity on regional and global defence and security issues within the framework of the current military and political situation with the USA, which has been our ally since the Korean War, will also make significant contributions to regional and global peace and security.” sentences were also included.