by Arif Kılıç
in Air Force and Air Systems, News
0

A HİSAR which is taking part in the exercise (MLS)

“Beginning of Activity Year Terrain Exercise” was conducted by the units of the 2nd Army Command. At first glance, the HİSAR Air Defense Missile System, Leopard 2A4T1 modernization and TASMUS (Tactical Field Combat System) were featured in the video for the exercise shared by the Ministry of National Defence on social media.

The air defence missile system, which is thought to be HİSAR-A+, and the Leopard 2A4T1 were systems that had been expected to show themselves in the field for a while. Also, the scenes about exercises T-155 Storm Self-Propelled Howitzer, ACV-15, and M113 took part.

Even though the type of HİSAR missiles is not indicated, it is highly possible that  HİSAR A+ missiles have been used when looking at the size of missiles canisters and the carrying platforms being trucks. HİSAR Air Defense Systems, as a project of Presidency of Defense, were developed through indigenous and national means in cooperation with Aselsan-Roketsan. The warhead was developed by TÜBİTAK SAGE (Defense Industries Research and Development Institute). This system, which has 360-degree activity, can engage and fire on 6 targets at the same time. While the prevention range of the HİSAR A+ System is 15 km, the prevention range of the HİSAR O+ System reaches 25 km.

HİSAR, which is able to operate in any kind of weather conditions, can be effective for warplanes, helicopters, air-to-surface missiles, cruise missiles, and unmanned combat aerial vehicles/ unmanned aerial vehicles(UCAV/UAV). HİSAR that is designed in line with the current needs and threats in our country, with its strategic and critical facilities, will be a force multiplier in the country’s air defence. 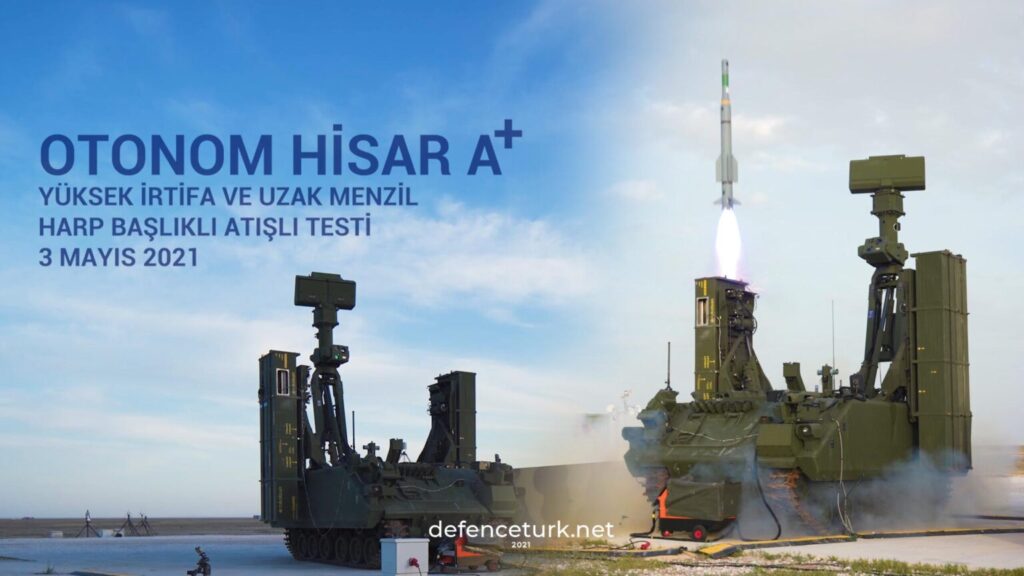 After the Missile Launching Systems which operate in coordination with the Firing Management Device in the HİSAR A+ Project and the missiles entered the inventory, the Self-Propelled Autonomous Low Altitude Air Defense Missile System (Autonomous HİSAR A+), which includes all the necessary sub-systems to manage to operate alone, was also delivered. In this manner, all elements of the HİSAR A+ System were delivered to the Turkish Armed Forces. Autonomous HİSAR A+ will perform the air defence mission of armoured mechanized and mobile units. The system stands out with its ability to move in difficult terrain conditions, change positions quickly, short reaction times and perform a task alone.

Another new system that showed its face in the field was the Leopard 2A4s modernized by ROKETSAN. The first 2 of the tanks which are named Leopard 2A4T after the modernization, were delivered to the TAF on December 20. It is planned to modernize 40 tanks in total as part of the project. Ballistic tests of the new armour which will be integrated into the tanks were carried out between July and December 2019, and it was highlighted that full protection was provided in all fire tests.