France fails to substantiate NATO allegations that a French frigate was harassed in the Eastern Mediterranean.

On  July 15 Democracy and National Unity Day,Minister of National Defence Hulusi Akar joined a ceremony held at the Ministry of National Defence, with Chief of General Staff General Yasar Güler, Commander of Land Forces, General  Ümit Dündar, Naval Forces Commander Admiral Adnan Özbal, Air Force Commander General Hasan Kucukakyuz and deputy ministers. The ceremony, in which necessary measures were taken to combat the coronavirus outbreak, was attended by the relatives of those martyred as well as civilians and military veterans trying to prevent the treacherous coup attempt on July 15.

In his speech, Minister Akar pointed out that Turkey had been exposed to many threats and dangers throughout its history. He emphasized Turkey was targeted due to its strategic geography, which has important and high potential in all direction.

“ The allegations are completely unrealistic, we’ve been demonstrate right.”

Reminding of the claim that French ship was harassed in the Eastern Mediterranean, Minister Akar said: “We have shared all information, documents, videos and photos regarding this issue with NATO’s civil-military authorities. The allegations are completely unrealistic, we’ve proved right.”

Stating that Turkey has been friendly, relationship, open to cooperation and supportive since the very beginning, Akar said, “Our ships even provided  the French ship with refuelling on the request. The French ship was not harassed, the French ship engaged in a very dangerous maneuver, interrupting the convoy of 3 Turkish ships at a speed of 20 nautical miles, disregarded the existing NATO procedures and did not dare combat liaison. Besides, they were unable to provide NATO authorities with technical data. Turkey is a member of the alliance that is at the core of NATO, shares all its common values and is committed to fulfilling its obligations and will continue to do. NATO authorities thanked Turkish personnel for the professional and cautious approach during the incident. As such, we still expect an apology from French allies.”

France, which is a permanent member of the United Nations Security Council, display support for Haftar forces along with Russia, which is on par with France in UNSC. There were some face-to-face talks led by Macron with Haftar in advance. Indeer, the contradictions for France start from that point. In addition, The documents and photos released in the publication, which AFRICOM issued, demonstrated that Russia was active in the region. Russia dispatch both equipment and military personnel to the country. Russian state-backed mercenaries played an active role in the ranks of Haftar in several events under Wagner. What must be questioned at this point is the stalemate between NATO and the EU. Wih the founding purpose for defense against the menace emanating from Russia and as a NATO member, France has close ties with Russia-backed Haftar in Libya.

Joining NATO’s Operation Sea Guardian in the Mediterranean, France has recently made a striking claim. According to the statements made by France, the efforts to investigate the warships of the French navy due to the doubts arising from a merchant ship cruising in the Mediterranean were blocked by the Turkish navy.The Turkish frigate allegedly made radar illumination towards the French Courbet frigate. The allegations, rejected by Turkish authorities, were presented by France to NATO. Dissatisfied with the NATO’s report on the incident, France proved its wrongdoing by failing to share technical data regarding the alleged harassment.

A graphic, presented by Ambassador Musa to French senators in Commission for Foreign Affairs, showing the maneuvers of the French Navy La Fayette-class FS Courbet (F-712) frigate while approaching the merchant ship called Çirkin protected by the Turkish navy: 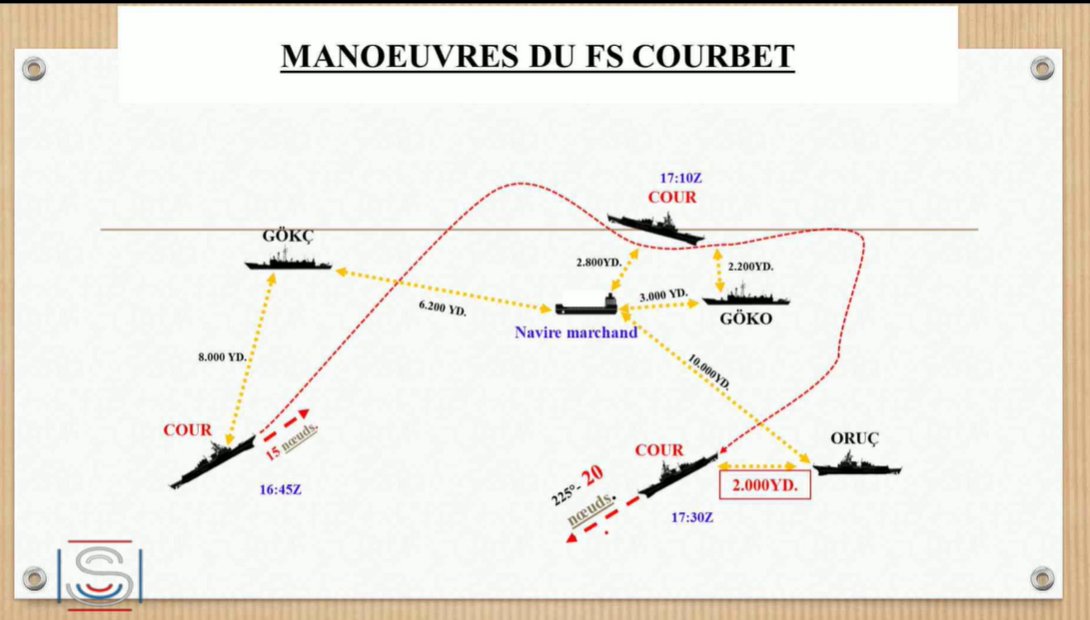 Turkish defense minister: We will continue to stand by Azerbaijani Armed Forces