by Şeyma Sarıca
in General
0 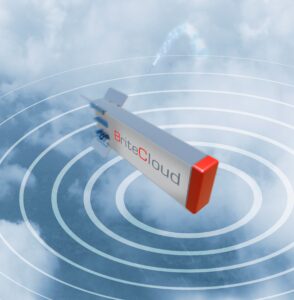 A recent trial, which saw the German Armed Forces launching a Leonardo BriteCloud 218 decoy from an Airbus RPATS test platform, to evaluate its potential in protecting flying weapon systems from radar-guided missiles, has been heralded as a success.

The trial, which was conducted with support from Airbus, Leonardo and the German analysis and testing firm IABG, saw live BriteCloud 218 rounds ejected from the RPATS during flight, allowing the aircraft to successfully evade missiles equipped with Semi-Active Radar (SAR) seeker technology.

BriteCloud is a flare-sized electronic device that protects aircraft from the most modern radar-guided missiles. Launched from a standard countermeasure dispenser, it transmits powerful radio emissions that simulate the missile’s expected target, drawing the threat towards BriteCloud and away from the aircraft. BriteCloud is a world first, with Leonardo the only company to have successfully miniaturised such sophisticated jamming technology into a flare-sized package.
The German trial marked the first time BriteCloud has been launched from an RPATS platform. With the trend towards remotely-piloted air systems becoming increasingly valuable assets, attention is turning to protecting themfrom attack. BriteCloud, which does not require integration, is a cost-effective way to equip such assets with latest-generation jamming capabilities.

The BriteCloud 218-variant rounds used during the trial pack this technology into a standard-sized rectangular countermeasure casing measuring two by one by eight inches. This means it is compatible with a range of common dispensers such as the AN/ALE-47, making it possible to economically boost the defences of older F-series jets such as the F-15 and F-16, as well as smaller RPAS platforms.

BriteCloud 218 is also currently undergoing the United States Foreign Comparative Testing (FCT) programme, led by the US Air National Guard (ANG), which could lead to the decoy entering service with the United States Air Force (USAF) Air Combat Command and other US services.

Meanwhile, Leonardo’s original BriteCloud 55 decoy (which is slightly larger and compatible with round 55mm flare dispensers such as those on the Eurofighter Typhoon and Saab Gripen), has already gone into active service with the UK’s Royal Air Force.

Royal Navy seizes £11 million worth of drugs in Arabian Sea