According to the press release of Turkish Aerospace Industries (TAI) on June 1, 2021, the HÜRKUŞ Air-Ground Integration Aircraft performed a demonstration flight for the first time. TAI participated in the International Anatolian Phoenix (Uluslararası Anadolu Ankası) -2021 exercise held in Konya.

HÜRKUŞ Air Ground Integration Aircraft, the new version of the HÜRKUŞ basic trainer aircraft, which is among the original products of Turkish Aerospace Industries, held a flight show. He made his debut by organizing a flight show for the first time. HÜRKUŞ which attracts attention during the flight, will be used in the training of pilots.

HÜRKUŞ drawing attention within the scope of the exercise, is planned to be used in the training activities of the Air Forces Command. Forward Air Controller, Forward Combat Controller and Joint Fire Support Team trainings will be given with HÜRKUŞ. 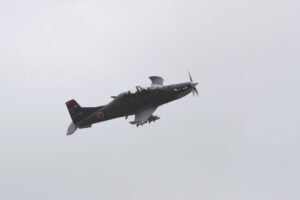 Being called an advanced variant according to the 135th fleet requirements, HÜRKUŞ is expected to provide significant advantages with its low usage costs and advanced avionics systems. In addition to the existing advanced features of HÜRKUŞ, it will gradually integrate an Electro-Optic/Infrared (EO/IR) camera, laser-guided and unguided training munitions, as well as autopilot integrations.

“HÜRKUŞ will be used for ‘training’ purposes, especially in the 135th fleet, in this important exercise, which was held with the participation of the commands of various countries. To explain a little more, our aim with HÜRKUŞ is to train air and ground elements. We want to make significant contributions to our Air Force Command with the advanced systems and features of HÜRKUŞ.”