Explanations on MIUS from Selçuk Bayraktar

Selçuk Bayraktar, who was a guest of the broadcast of Gebze Technical University Aviation and Space Club, made statements about MIUS.

Selçuk Bayraktar gave some information regarding the current and future projects, including the Flying Car, Bayraktar TB-3 and MIUS (Unmanned Combat Aircraft System) in the broadcast organized by Gebze Technical University Aviation and Space Club.

In addition to these, Bayraktar underlined that the TB-3, which, like MIUS, can land and take off from TCG Anadolu, can perform duties together with MIUS, and that these aircraft, which will be power multipliers even on their own, can become a greater power multiplier with this synergy. Considering the capabilities provided by Bayraktar TB-2 in the field, it is possible to see that TCG Anadolu will have its own ISR concept through the TB-3. 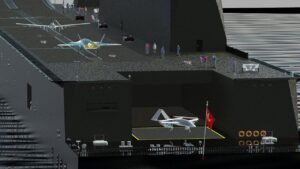 The situational awareness and effectiveness of MIUS will increase significantly thanks to the TB-3’s long-term endurance and ISR capabilities. This situation will be valid not only for MIUS but also for other elements that will work with TCG Anadolu or together with it.

In addition, Selçuk Bayraktar shared an image containing the technical features of MIUS during the broadcast. As can be seen, as a result of the changing task definitions depending on the changes in the Air Force’s fighter aircraft inventory in the near future, there are noticeable changes in the features such as tonnage, useful load, manoeuvrability and visibility in the design.

On a question about what will come after MIUS, Bayraktar replied that the next step is smart flying cars. He also mentioned that studies in the field of space are also on the agenda. Bayraktar gave an example of the distance Baykar Defence has covered in the field of UAV since 2005 regarding flying cars and he signalled that they aim for a similar picture after the first flight of CEZERI.