EU sanctions on Turkish firm over the firm send “military equipment to Libya.”

EU Foreign Ministers met in Brussels before the EU Leaders Summit. The bloc’s Foreign Ministers announced that they agreed to impose targeted sanctions on three transport firms, including Turkish, Jordanian, Kazakh and also two Libyan citizens, for violating an arms embargo on Libya.

No sanctions decision was issued on Belarus due to the veto of the bill of the Greek Cypriot Administration of Southern Cyprus that wants to impose sanctions on Turkey over Natural Gas exploring activities in the Eastern Mediterranean. The firms are from the aeronautics and maritime sectors. The EU announced that the Avrasya Shipping firm headquartered in Samsun broke the arms embargo through the firm’s cargo vessel Cirkin. EU said in a statement that cargo vessel Cirkin was linked to transports of military material to Libya in May and June 2020.

No statement has yet been made by Avrasya Shipping firm. It was stated that the other two firms were Kazakhstan-based commercial cargo carrier Sigma Airlines and Jordan-based Med Wave Shipping firm. According to French news agency AFP,  EU foreign ministers signed off on the measures, which freeze any EU assets held by the companies, cut them off from EU finance markets and bar them from doing business with anyone in the bloc.

The United Nations had decided on an arms embargo on Libya, which has been in conflict since the overthrow of Moamer Kadhafi in 2011. EU also supervises the embargo with its navy in the Mediterranean. According to AFP, EU is also collecting intelligence on those who break the embargo, and the penalty decided today was the first EU sanction decision on Libya. 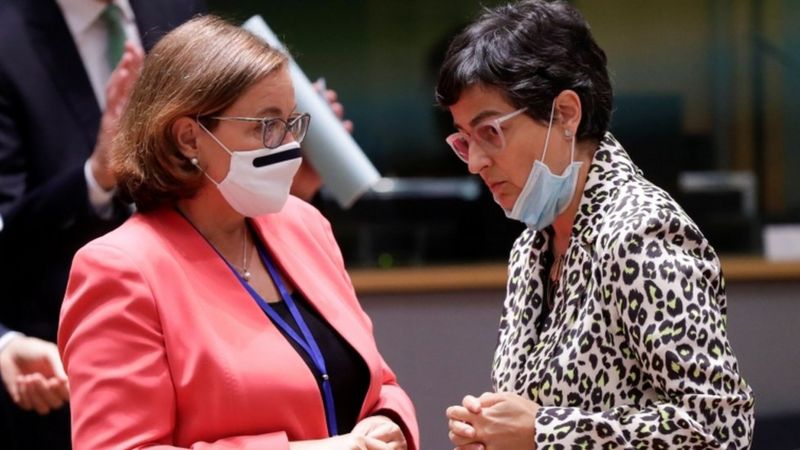 According to the news agency, the decision has more risk of nervous tension of EU-Turkey relations, due to the last developments in the Eastern Mediterranean.

The Turkish Foreign Ministry said in a statement: “The inclusion of a Turkish maritime transportation company within the list of sanctions in connection with Libya at today’s meeting of the EU Foreign Affairs Council holds no value whatsoever vis-à-vis Turkey.

Operation Irini of the EU rewards Haftar the pirate, but it punishes the UN-recognized Libyan Government. While Turkey’s humanitarian aid to the legitimate government is labeled as a violation of the embargo, the fact that the countries, UAE in particular, and companies, which ship arms to the putschist Haftar by land and air in contravention to the resolutions of UNSC, are overlooked, is a clear indication of the partial stance of the EU.

Instead of taking a stand on the side of international legitimacy, it is evident that the EU insists on maintaining its double-standards as demonstrated with Operation Irini, which rewards the aggressor.

Such an erroneous decision is highly unfortunate at a time when efforts are underway for de-escalation in the Eastern Mediterranean.

If the EU wishes security and stability to prevail in the region, it should drop this partial stance and act in consultation as well as cooperation with Turkey.”