The first engine start of the Utku Power Group, developed for the new generation light armored vehicles, was carried out.

Mesude Kılınç stated that Utku Power Group’s engine was started for the first time and that engine test activities were started. Stating that the transmission will be started in the near future, Kılınç said that the test activities will continue until 2023. For Utku Power Group, the contract was signed in 2017, while the system acceptance is expected to be completed in 2023. 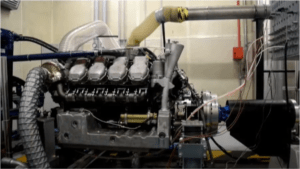 Within the scope of the Power Group Development Projects, two different Power Groups are being developed for the New Generation Light Armored vehicles and the ALTAY Main Battle Tank. Within the scope of the New Generation Light Armored Vehicle (YNHZA) Power Group (UTKU Project), a suitable power group is designed for tracked light armored combat vehicles up to 40 tons. This power group; consists of a cross drive, “T” connection type transmission with steering and braking functions, integrated cooling package, air filtration system and exhaust system from an 8-cylinder, V-type, turbodiesel, water-cooled engine with a maximum power of at least 675 kW (920-1000 HP) and a maximum torque of at least 2700 Nm. 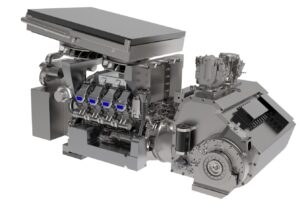