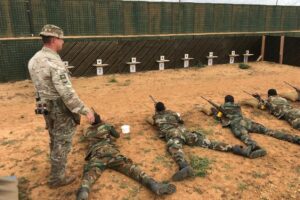 The British Army has trained its 500th Somali soldier in the essential infantry skills they need to combat armed groups and ensure security and stability in the country. The latest batch of 113 troops marked the end of their training with a ceremony in Baidoa, Somalia on 31 December.

On completion of the course, soldiers were provided with uniforms and equipment which, when combined with their training, will allow them to operate much more effectively. The contingent are the fifth Somali company trained by Britain since the course was rolled out in the country in September 2019. The UK has also provided the SNA with military vehicles to support security operations and a new barracks in Baidoa that can accommodate 450 troops.

This milestone shows Britain’s ongoing commitment to help Somalia provide security and stability for its people, while combating terrorist groups that threaten the UK’s interests at home and abroad.

The United Kingdom and our Armed Forces will continue to support Somalia, with plans to double the number of troops trained under this scheme in 2021.

The UK remains fully committed to training the Somali National Army in Baidoa. In September, we ran a course for headquarters staff in how to plan and run operations, and this week are graduating another infantry company (of 113 soldiers). We expect to train a new company around every eight weeks next year, and to complete our training of 8 Brigade by the end of 2021”.

I congratulate the soldiers from 60 Sector stood here today. They displayed impressive professionalism and commitment during eight weeks of tough training and are well prepared for the challenges that lay ahead.

I would also like to thank their Somali and British instructors, whose relentless pursuit of excellence set a fine example to the soldiers. We look forward to the next Company Collective Training course which starts in January 2021.

The milestone graduation of the 500th soldier from the course underlines the UK’s commitment to Somalia’s longer-term security, with plans to train five more companies comprising around 600 troops in 2021.

Over 1,750 officers and soldiers have attended various military courses at the British-funded training centre in Baidoa.

It follows an announcement in September 2020 that the British Army had trained the first Brigade Headquarters for a generation in Somalia. A total of 19 SNA officers attended the course – adapted to ensure it could take place in accordance with COVID force health protection measures – which covered planning and delivery of stabilisation operations and prepared the officers to work alongside international partners to deliver security for the Somali people.

The Brigade Staff Course gave me the tools to plan operations, and the Company Collective Training course gives our soldiers the skills to conduct those operations.

The UK Minister for Africa, James Duddridge MP, recently underlined Britain’s continued commitment to Somalia with a new support package worth £21.8 million. The package included £1.6 million to counter the threat from roadside bombs, and a further £3.37 million for the Somali Security Forces engaged in joint operations with the African Union Mission to Somalia (AMISOM).