Polish Defense Minister Mariusz Błaszczak shared a post about Bayraktar TB2 Armed UAV on his official Twitter account on May 18, 2021. Minister Błaszczak said, “Good news is coming soon… stay tuned!” in his statements. The post shared by the Defense Minister and implying procurement of TB2 Armed UAV indicates a new export success. Defense Policy Specialist Arda Mevlütoğlu stated that besides being a new export success, it is strange that Bayraktar TB2 UAV is sold to another country where Russia is a neighbour.

Minister Varank made important statements at the Third Defense Industry Meetings with the theme of “Domestic and National Production in the Defense Industry” which was organized online in cooperation with SAHA İstanbul and İstanbul Chamber of Industry.

Varank gave the first signal for new exports by referring to the Armed UAV sales made to Ukraine, Qatar, Azerbaijan and Tunisia, emphasizing that the Turkish Defense Industry institutions have done very well despite the difficulties. Varank said:

“I believe that the investments we have made, especially in the last 5 years, will bring our country to the greater position in the defense industry in a much shorter time. In fact, we started to receive the signals of this with our recent large-scale international sales. Our Armed UAV sales to Ukraine, Qatar, Azerbaijan and Tunisia. I believe that we will also see The Bayraktar and The Anka which to be procured from Turkey in the skies of Europe very soon. The phrase UK Defense Secretary Ben Wallace uses for our UAVs is “game changer”; this clearly means accepting Turkey’s superiority in this area, it means admitting that Turkey now determines the rules.” 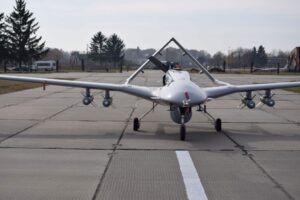 In the inventory of the Turkish Armed Forces and General Directorate of Security, 228+ mini-UAVs have already completed their 100,000+ flight hours. Furthermore, 154 units of Bayraktar TB2 UAVs which has been used in the armies of Azerbaijan, Qatar and Ukraine, as well as Turkish security forces, have conducted more than 280,000 hours of flight. The 382+ UAV platform, offered by Baykar Defense to the use of security forces, brought in something new and in Turkish aviation history by performing more than 380,000 hours of flights.