by Şeyma Sarıca
in General
0

The Azerbaijani Armed Forces are conducting training exercises together with Unmanned Aerial Vehicle (UAV) teams. According to the information provided by the Ministry of Defense of Azerbaijan, UAV’s carry out  communication missions with reconnaissance and command centers at different altitudes as part of these exercises. In the images published by the Ministry of Defense of Azerbaijan, it can be seen that the Bayraktar TB2 UAV developed by Baykar Defense also includes the Israeli-made Heron UAV.

In February 2021, it was reported that 77 Azerbaijani soldiers under the Azerbaijan Air Force Command successfully completed Bayraktar TB2 UAV Operator training given by Baykar. At the end of the training, which was stated to last about 4 months, the certificates of the soldiers who will serve in the Azerbaijan Army as UAV pilot, task commander, payload operator and technician were given at the graduation ceremony. Baykar General Manager Haluk Bayraktar and Baykar Technology Leader Selçuk Bayraktar made speeches at the ceremony held in Baykar Flight Training Center in Keşan. The ceremony, Azerbaijani Ambassador to Turkey as well as Azerbaijan Khazar Ibrahim Khazarica Air Force Deputy Commander Brigadier General in İslamza Namiq and his delegation also attended.

Najaf Necefov, the representative of the trainees who graduated at the ceremony, said that they will reflect the trainings given by Baykar to the field in the best way. Najafov, while thanking you for your interest shown to them, Azerbaijani poet Bahtiyar Vahapzade freedom to read his poetry, emphasizing the Azerbaijan-Turkey friendship between the two countries. 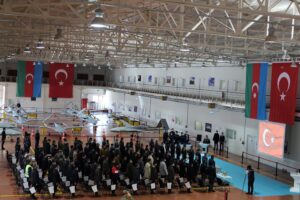 28 years of occupation ended in 44 days

Azerbaijan launched a military operation on September 27, 2020 against Nagorno-Karabakh, which has been occupied by Armenia for nearly 28 years. During the operation against Armenia, Azerbaijan used Bayraktar TB2 UAV (armed unmanned aerial vehicle), which was developed nationally and originally by Baykar, on the entire front line. According to the studies confirmed by defense analysts, many air defense systems, radar systems, tanks, armored vehicles, trucks, arsenals, positions and units belonging to the Armenian Army were destroyed with Bayraktar TB2 UAVS. This success of Azerbaijan’s army, which surprises the world, has been interpreted by the world media and defense experts as changing the war history of Turkish UAVs and reaching a playmaking power.