US company Aveum launched the first stage of the satellite launch system, the unmanned aerial vehicle Ravn X, on a live broadcast on Youtube. The design resembling Loyal Wingman UAVs at first glance drew attention. Aveum introduced the Ravn X as a fully autonomous and reusable system with a short take-off distance (1 mile ~ 1.6 km), as well as a vehicle aimed at carrying payloads to Low Earth Orbit.

Ravn X will launch payloads of 100 to 500 kg into low-orbit. In the first stage, the drone will rise to a certain altitude (30,000-60,000 feet) and then complete the second stage for payload. The second stage will launch the payload to orbit with its own jet engine (using Jet-A fuel). 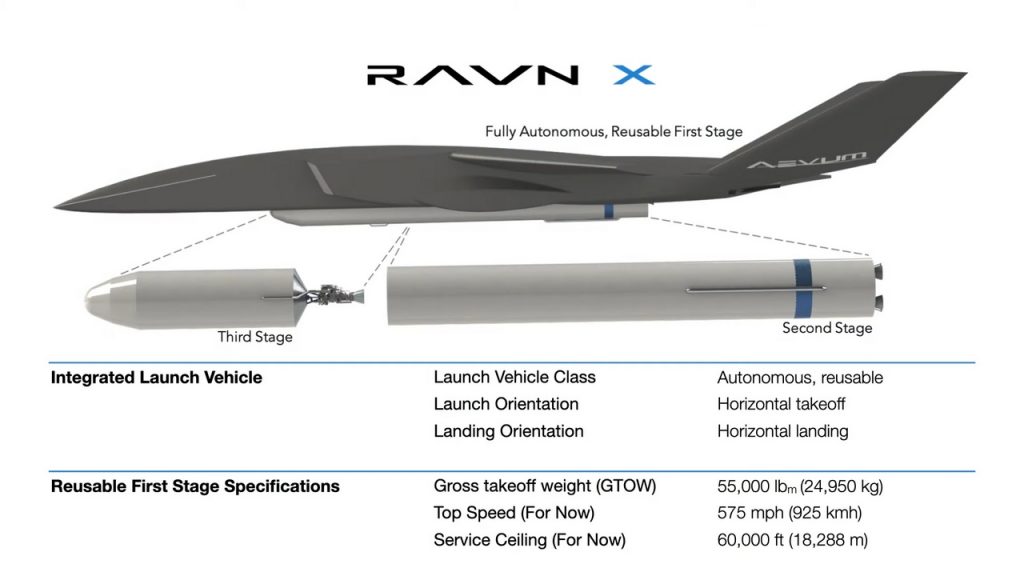 In the presentation, Jay Skylus, founder and CEO of Aevum, said, “We will begin to conduct the tests required for airworthiness and launch licenses. We expect Ravn X to be operational 18 months after meeting the necessary regulations.”

Ravn X, with a take-off weight of 25,000 kg, has a wingspan of 18.3 meters and a body length of 24 meters. Entering contracts with the US Air Force and the Pentagon, Aveum is one of eight companies that have contracts for orbit launches by the Space Force.

Skylus said that they wanted to be a part of the launches, costing 5-7 million dollars, 8-10 times a year.

Ravn X’s first mission will be the US Space Force’s ASLON-45. In fact, a $4.9 million contract was signed with Vector Launch company in 2019 for this mission. However, it was announced that the company was later withdrawn for financial reasons. The mission is aimed to be completed in 2021.

The first stage engine was run, according to the flight data recorded during the live demonstration on Youtube.

Aevum is not the first company to develop a satellite launch system. Northrop Grumman’s Pegasus rocket upgraded multiple satellites. However, these systems were run in manned aircraft.