Algeria and Italy, which are two riparian countries in the Mediterranean, are holding talks to determine their maritime jurisdiction.

Italy, which is one of the important actors of the Mediterranean, has started bilateral negotiations with Algeria, to decide upon their maritime jurisdiction. It is stated that the agreement on maritime jurisdictions, which Italy is planning to sign with Libya’s neighbor, Algeria, with which Italy has close relations, will have positive results for Libya in the future. The statement of the Italian Foreign Minister regarding Algeria as “the country with which Libya today shares political efforts for its stability” is considered to be the development of relations between 3 countries in the region.

In his opinion, he expressed “The Algerian government’s satisfaction” for the initiation of this negotiation process, which is the fruit of the regular bilateral talks and political decision taken at the highest level of our two states during the visit of the President of the Italian Council of Ministers Mr. Giuseppe Conte to Algeria. 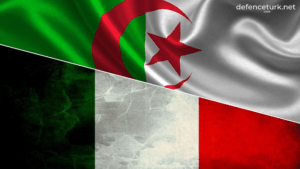 Algeria is an extraordinary partner

It is planned that the Foreign Minister will meet with other high-level Algerian officials and discuss bilateral relations and their hopes. The Italian Foreign Minister described Algeria as “an extraordinary partner” for his country and the Mediterranean, saying “We share the enormous opportunities and hopes for history.” Di Stefano said: “Algeria is a country with which we have excellent relations both politically and commercially, a country that really contributes to very important parts for Italy, such as energy supply and the management of the Mediterranean in terms of security and wealth.”

In addition to cooperation in the economic and political fields, the Italian Foreign Minister said Algeria is “the country with which Italy today shares the political effort for the stability of Libya” He also added that the establishment of the Technical Committee today is a “fundamental” step, and that the delimitation of the exclusive economic zones of the Mediterranean “can only be achieved through the consultations between neighboring countries”.

Di Stefano, indicating that Italy and Algeria do not need any misunderstanding factor, concluded his states by saying, “We share a small but rich area and instead of dividing it, it is necessary to unite it.”