SSB İsmail Demir announced that the Aksungur Armed UAV successfully hit the target at a range of 30 km with the KGK-SİHA-82.

In the statement made by İsmail DEMİR on his Twitter account, it was stated that AKSUNGUR UAVs successfully hit the target at a range of 30 km with the 340 kg KGK-SİHA-82(Wing Assisted Guidance Kit) for the first time. Ismail Demir shared on Twitter,

“We continue our path with determination. Our UAVs are getting stronger with new ammunition test shots. AKSUNGUR UAVs successfully hit the target at a range of 340 km with the UPS-UAV-82(Wing Assisted Guidance Kit) weighing 340 kg, which it scored for the first time. “

gave place to his statements.

AKSUNGUR, which took off from Ankara with the KGK-SİHA-82(Wing Assisted Guidance Kit) useful payload developed by TUBITAK SAGE, successfully hit the target from a range of 30 km at an altitude of 20,000 feet, going to Sinop with satellite control. Having successfully fired with a range of 30 km, AKSUNGUR aims to achieve another success with the KGK-SİHA-82(Wing Assisted Guidance Kit) , recently increasing the range to 45 km. Turkey Youth Foundation Istanbul Provincial Delegation organized by the National Technology Academy program was a guest on the last session of iron, during his speech at Turkish Aerospace that AKSUNGUR developed by the Industrial Armed had reported that the UAVs in April 24, 2021 day of testing subjected. According to Demir’s statements, AKSUNGUR UAVs fired the Winged Guidance Kit developed by TÜBİTAK SAGE in the test conducted in Sinop. In November 2020, SSB Ismail Demir announced that firing from AKSUNGUR UAV was carried out with TEBER laser guidance kit ammunition. “This is the first time a TEBER guidance kit ammunition has been thrown from a UAVs, ” the Iron social media account said via twitter. Roketsan’s Teber shot from Aksungur was successful.” gave expression to the place. 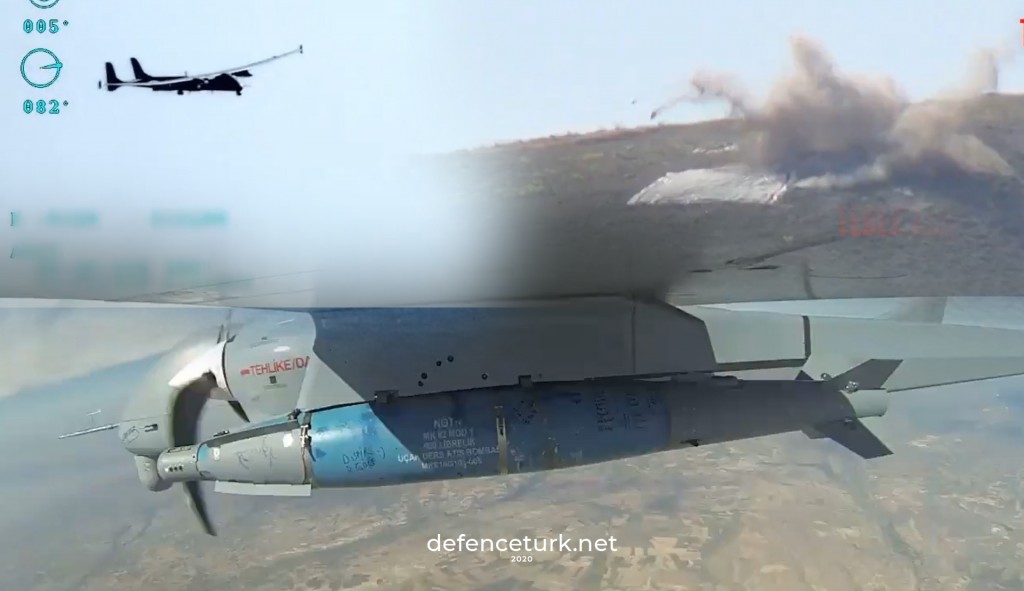 KGK is a wing-assisted guidance kit that converts existing unguided 1000 lb Mk-83 and 500 lb Mk-82 general purpose bombs into long-range, air to ground smart weapons. With KGK, the bombs have the capability of precision hitting of target from 100 km range, in all weather conditions, providing aircraft to complete the mission safely without entering into enemy air defense zone.