The first aircraft of mass production, Akıncı S-1, whose training and test flights continue, was photographed while carrying the HGK-84 under its underbody.

There were the images of Akıncı S-1 and PT-2 included in Selçuk Bayraktar’s post on Twitter. Selçuk Bayraktar stated in his post that the flights of PT-2 and S-1 continue. As it is known, as of March 2021, the personnel started training for Akıncı UCAV.

An important detail that stood out in the images shared was Akıncı S-1, equipped with the HGK-84 (Precision Guidance Kit) developed by TUBITAK SAGE. Akıncı S-1, which previously carried out fire tests with MAM-C, MAM-L and MAM-T, was equipped with a general-purpose bomb used by warplanes for the first time. 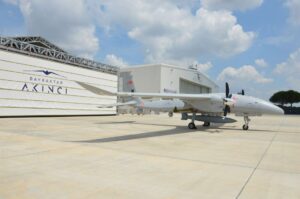 This is important for Akıncı UCAV in two different ways. The first of these, the HGK-84, with a weight of close to 1 ton compared to the MAM-C, MAM-L and MAM-T used in the previous test, is a new stage in testing Akıncı’s carrying capabilities. The other is that the underbody weapon station was used for the first time; The underbody weapon station, which can carry 1 ton of ammunition, can carry different ammunition combinations or various payloads, as well as SOM and SOM-J cruise missiles. 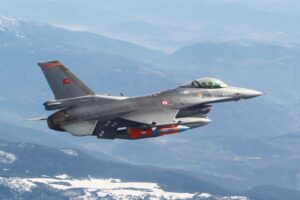 As it is known, in addition to producing the MK-80 series general-purpose bombs, Turkey also develops and manufactures guidance kits with various features and ammunition with different effects based on the physical structure of the said bombs. For example, there are munitions such as the MK-82T Thermobaric Bomb, the NEB (Penetrator Bomb) and the recently released SERT-82 and SARB-83. Different guidance kits and impact options for general purpose bombs will expand engagement opportunities for Akıncı as well as for warplanes.

The air-to-air missile with Ramjet engine from TÜBITAK Sage: GÖKHAN

All tests of ARES 35 FPB Fast Patrol Boat is completed