The ACV-19 (Armored Combat Vehicle) is the general name for a class of 15-19 tonne, modern high performance vehicles derived from the highly successful FNSS ACV. These vehicles have proven themselves with a number of armies worldwide. ACV-19 offers the latest developments in high value vehicle performance for internal volume and payload but maintains the advantages of commonality with ACV family of vehicles. 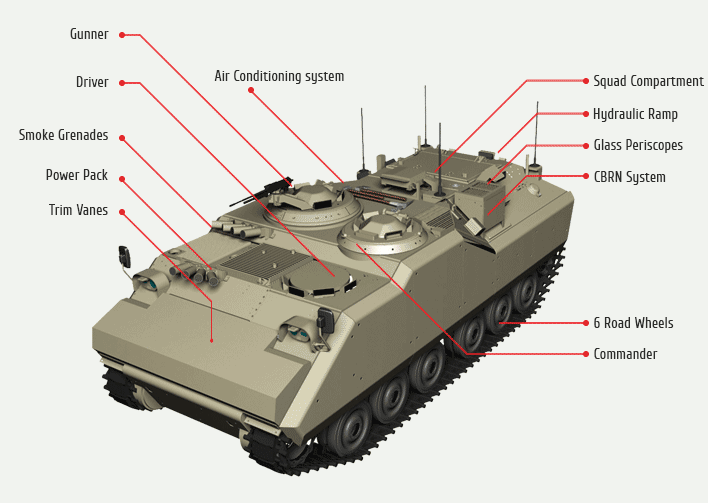 The differences between ACV-15 and ACV-19 consist primarily of a longer, stretched hull with 6 road wheels, heavy duty final drives, and more aggressive suspension. The ACV-19 offers more volume under armor, more payload capacity than ACV-15. Consequently, the ACV-19 chassis can support heavier payloads such as larger turrets, without compromising the mobility offered by ACV-15. Additionally, 90% spare parts commonality among ACV-19 and ACV-15 make maintenance more convenient for users of both variants. The ACV-19 chassis are provided with a unique, space laminated armor system combining steel and aluminum technology to provide a high level of armor protection against direct kinetic energy threats. The hull provides protection against mines as well.

The vehicle is upgradeable with growth potential and its configuration can be tailored in accordance with user requirements into a true family of vehicles which can be utilized by cavalry, infantry, MBT’s support vehicles and artillery