The Armored Combat Vehicle (ACV) is the generic designation for a tracked, diesel engine powered, heavy armored platform in the 13-15 tonne class, capable of performing combined arms operations with main battle tanks. The platform design allows integration of different subsystems for executing a variety of different roles. The Armored Personnel Carrier (APC) chassis forms the base vehicle for all other members of ACV-15 Family of Vehicles.

The ACV-15 is a full tracked (5 road wheels), lightweight, low silhouette armored vehicle capable of high-speed operations on desert conditions, poor infrastructure, roads and/or highways. Movement of the tracks propels and steers the vehicle on land. Access to the vehicle is through personnel hatches located on top and a hydraulic ramp which also features an integrated personnel door, located at the rear of the vehicle A large cargo hatch cover is provided in the top deck, behind the turret. Access for servicing and maintenance of the power plant, located in the front right section of the vehicle, is through internal covers and through a cover on the front of the vehicle. Two armored fuel compartments are located in the rear of the vehicle for weight distribution and crew safety. The compartments are separated from the vehicle by an armor plate. 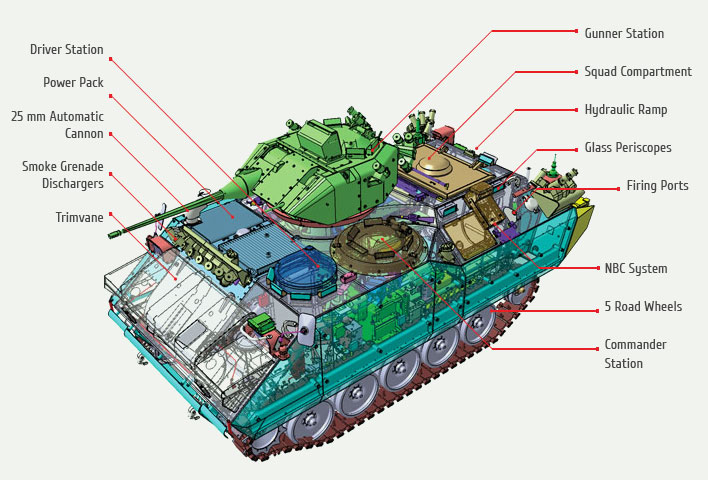 The hull is constructed of ballistic aluminum plate. Plate thickness varies on the different planes of the hull to meet ballistic requirements. The all welded construction provides a watertight hull; and hatches, doors, and other openings have watertight seals. The power plant and the driver’s and commander’s compartments in the forward area utilize about one-half the space, while a turret located on the middle right section, and the personnel compartment in the rear utilizes the remaining one-half.