by Elifnur Başaran
in Air Force and Air Systems
0

Baykar Defence Technical Manager Selçuk Bayraktar made a statement about the Unmanned Combat Aircraft System (MIUS) on which they were working, at an event organized by the Ministry of National Education.

Selçuk Bayraktar emphasized the National Technology Movement during the event and stated that the company will work on MIUS until 2023, also giving information about the Combat Unmanned Aircraft System (MIUS) studies. Some features of the MIUS platform drew attention in the slide used by Bayraktar. Expressing that the new generation fighter aircrafts produced will be the last manned fighter aircrafts, Selçuk Bayraktar stated that human-induced fighter jets and human-borne problems and constraints will be overcomed.

There were some technical features about MIUS in the reflected images. According to that, the platform, which will take its power from the MIUS turbofan propulsion system, will be able to stay in the air for about five hours at an operational altitude of 40,000 feet. MIUS, which can operate without a range restriction, will have a cruise speed of 0.8 Mach with the SATCOM data network. MIUS will be able to perform close air support, strategic offensive missions, suppression/destruction missions and missile offensive missions with one ton ammunition carrying capacity. 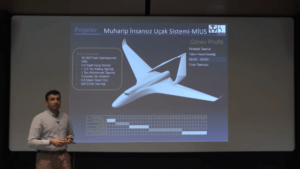 Turkish defense minister and military chief are in Tripoli